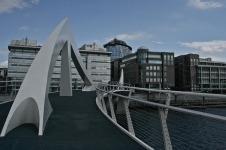 Strathclyde police have been forced to increase patrols on Glasgow's newest bridge due to a dangerous popular new craze.

The £6m structure links Tradeston to Broomielaw, and is known locally as the “squiggly bridge” because of its two pointed supports.

The bridge opened in May, but since then footage has been posted online showing people running up and down the supports.

The new craze has been dubbed “doing the squiggly” and has appeared on sites such as YouTube.

Superintendent Elizabeth Weir of Strathclyde police told the BBC it was a dangerous pastime that raised real concerns for public safety.

“This is not a sport. This activity is foolhardy. We have stepped up police patrols on the bridge in a bid to deter future activity and at worst, prevent deaths,” she said.

Credit: gj_theWhite
People have been running up and down the supports