Derwent London has said its confidence in the London commercial market remains strong despite worries the market is stalling.

The contractor, which completed the £46m Copyright building in Fitzrovia for Derwent two years ago, had been negotiating with the developer as sole bidder.

The developer recently announced that it had agreed a pre-let for the top six floors of 1 Soho Place to data research and software development firm G-Research.

Worries that political and Brexit uncertainty are stalling jobs in the capital have grown recently but Derwent’s head of development Richard Baldwin said: “The fact we’ve started on Soho Place and we’ve now signed the deal for the Featherstone Building means we’re confident about the market. If you look at the [recent] Deloitte crane survey, the office market here [in London] is still strong.”

Derwent’s upcoming major schemes include 19-35 Baker Street, a £50m-£100m office-led, mixed-use scheme designed by Hopkins in which Derwent has a 55% stake with the Portman Estate holding the remainder.

Baldwin said appointing a contractor was some way off with Hopkins having only just started stage 3 of the design process.

Hopkins is also behind Holden House at the eastern end of Oxford Street, which will involve building a seven-storey scheme behind the original facade which dates back to 1910. It has been given a pricetag of between £100m and £200m.

Skanska is due to start work on the Featherstone Building, designed by Morris + Company, this September.

Cantillon is currently completing work to pull down the existing building on the site while others working on the job include QS Exigere and project manager Blackburn & Co. 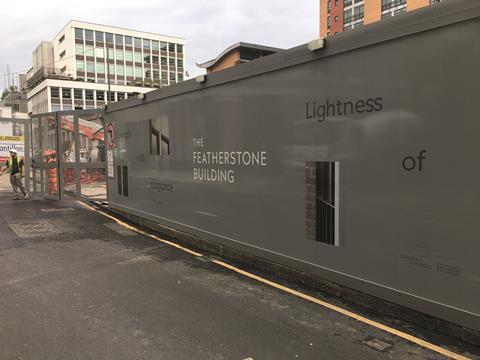