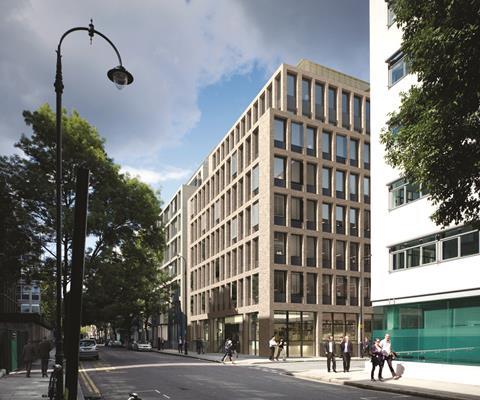 Derwent London has confirmed it will start construction on 620,000 sq ft of projects within eight months, taking its total amount of projects on site next year to over one million sq ft.

Derwent said it will start construction on its largest project to date - mixed-use 380,000 sq ft 80 Charlotte Street (pictured) and its 240,000 sq ft office project the Brunel Building - within eight months.

The update came in a third quarter trading statement for the developer, in which its chief executive John Burns said the firm was having its “best ever” year for lettings.

Derwent completed four projects with 226,000 sq ft of floorspace during the year - including a 102,000 sq ft office building on Chancery Lane - which it said were 92% let, sold or under offer.

Another two major projects remain under construction - White Collar Factory on Old Street and The Copyright Building in west London - which will complete in the third quarter of 2016 and 2017 respectively.