Wilkinson Eyre-designed cheme will stand next to Cheesegrater 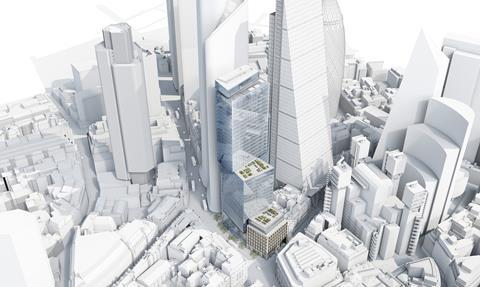 Wilkinson Eyre is about to submit plans for a 40-storey office tower to the City of London Corporation.

The 70,000sq m project will stand on the corner of Bishopsgate and Leadenhall, next to Rogers Stirk Harbour’s Cheesegrater in the so-called eastern cluster of tall buildings.

It will contain retail at ground and mezzanine level and promises a “public access viewing gallery” at level 40.

The architect described the scheme as a series of stacked blocks which become narrower as they get taller.

The architectural concept views each block as complementary but with slightly differing characteristics expressed through differing levels of transparency of the facades, it said.

The client is Mitsubishi Estate, part of the Japanese conglomerate that includes food brands, a car maker and arms manufacturer. Alinea is the cost consultant.

The building will aim for Breeam Excellent.