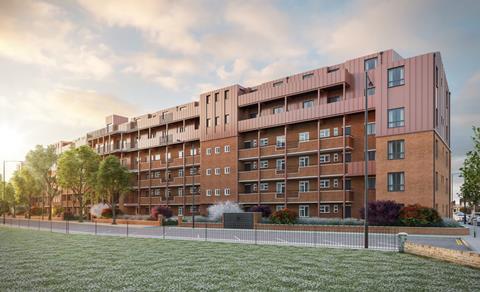 How the Bermondsey scheme will look when finished

The 30-strong firm has also completed two private rooftop homes, in Camden and Hampstead in north London, and is working on three more sites, developing 33 units.

Bhatti said the group was actively working with six local authorities across the capital to develop similar modular housing schemes. The Bermondsey project is planned as the start of what he hopes will be a programme to deliver thousands of affordable homes – either affordable rent or social rent – across the capital and beyond.

“We’ve a pre-app in with one council for 120 homes and I’m confident that [soon] all London councils will be looking to do this. Currently pretty much all 33 councils are at least considering it.

“The land is there and we can build on it. The question is: how do you scale it? The GLA [Greater London Authority] and Homes England funding programmes have been key milestones in councils’ understanding into how to mitigate risk.”

Earlier this year Homes England backed Apex Airspace with £9m of funding, while the GLA pumped in £10m through a revolving development loan facility.

The SME-focused Business Growth Fund also made an initial equity investment in the firm of £6.3m in 2018, topping that up with a further £3m this year.

“We’ve a pipeline of 1,500 homes and we plan to build 10,000 units in 10 years, with 3,000 in the next five years,” said Bhatti, who added that the group was “talking to a couple of very big players in the modular space to take things to the next level”.

Apex Airspace has manufacturing deals with three modular factories across the UK to build its units – Bhatti declined to name them – but no imminent plans to start up its own modular production plant. “We’re not considering it actively at the moment. Instead we’re focusing on making the airspaces work, looking at the affordable angle and at what the customer needs,” he said.

Bhatti said his firm worked with architects HTA and Farrells, while the group’s factory suppliers also had in-house design teams.

Bhatti said the Airspace operation was expected to report £20m in turnover next year, up from £1m in 2018. In August the firm appointed former Mace executive Jonathan Poole as its new construction director.