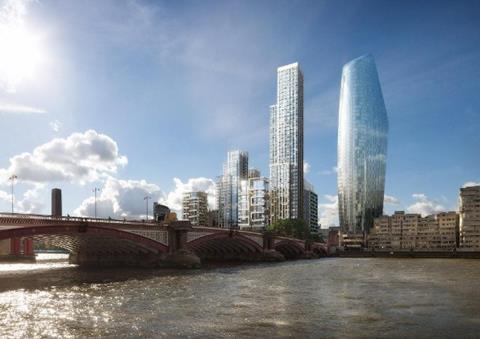 The developer behind Rogers Stirk Harbour & Partners’ Neo Bankside scheme next to the Tate Modern in London has been chosen to redevelop a nearby site which has been earmarked for a 48-storey tower.

Native Land is reported to be preferred bidder for the Bankside scheme which is being sold by funder Carlyle Group.

The residential-led scheme will comprise nine buildings of between five and 48 storeys and received planning permission in March.

The scheme incorporates 489 homes and will sit immediately south of Blackfriars Bridge and either side of the London Thameslink railway line. PLP is the scheme’s architect.

A group of Singaporean investors is also believed to be in Native Land’s team, reports the Sunday Times.

UBM is due to move out next February with the building set to be completely emptied later of other tenants, which include construction giant Balfour Beatty, in 2015.

The area is earmarked for major high-rise development with KPF adding another 11 storeys to the nearby 30-storey Kings Reach Tower, taking its height up to 155m. Further along the South Bank, eight towers are planned at the Shell Centre after communities secretary Eric Pickles gave the green light to Squire & Partners’ £1.2 billion scheme.