The Department for Education has said it wants to double the amount of schools built using modular construction every year from now on.

Suky Atwal, the department’s commercial director for capital projects, said it wants to “transform the construction sector” in the way it builds new schools.

He told an offsite event earlier this month: “Schools naturally lend themselves [to offsite solutions] because they’re repeatable.

“I’ve set us a challenge of, each year, we want to double the amount of schools we do in modular.”

He added: “[Modular] is far less disruptive if we program it properly. You can click together a primary school – put together all the modules – in about two weeks.” 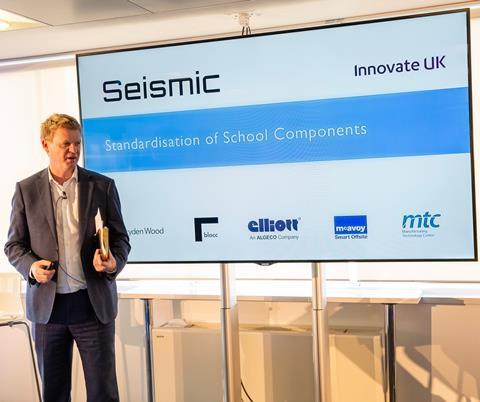 Atwal was talking at an event hosted by Richard Crosby, pictured, the project leader of the Seismic consortium

Atwal was speaking as the Seismic consortium was unveiling a modular steel frame and connector – which will be used instead of welding – for use on school construction.

The consortium is supported by the Department for Education (DfE) and plans to make its off-site system available for use by any contractor, including those who win a place on a £3bn MMC framework which launches later this year.

One of its members, Peterborough firm Elliott said it expects to double its £164m turnover in the next three years because of the government’s commitment to offsite initiative.

“We have doubled [our turnover] in the last three years and our intention is to double it in the next three years,” Colin Sargeant, managing director for Elliott’s off-site solutions arm, said. “We see our growth coming from more central government stuff – but also through persuading more of the private sector clients to come on board.”

Seismic will open up the system to others in the hope it will create an economy of scale which will eventually make offsite cheaper than traditional construction methods in the schools market.

“We want to give it to the market because it will increase the size of the cake,” Sargeant added.

The firm is also talking to other departments, including the work and pensions and justice ministries, about using its initiative in their capital works schemes.

Another offsite specialist, Northern Irish firm McAvoy, said earlier this year it wanted to double its £60m turnover by 2025 on the back of an offsite boom.