The airport operator invited bids for four logistics centres in April to support construction of the planned second runway.

The bidders come from all regions of the UK (see map below), reflecting Heathrow’s plans to “decentralise the supply chain”. 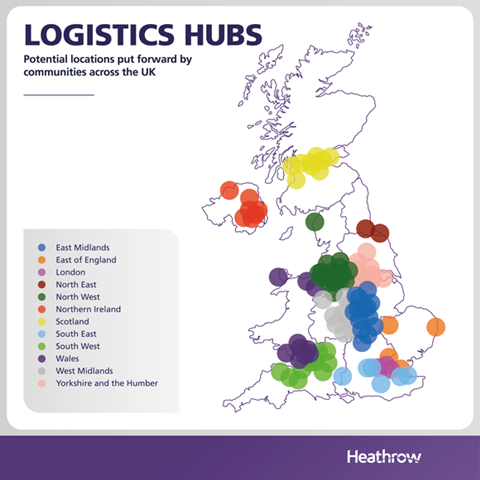 The airport said a short list of potential sites is expected to be announced later this year, and suitable locations will have to demonstrate the “positive economic impact” the hub will have in their area as well as “good connectivity, access to a relevant supply chain, strong local skills, support in their region and adequate facilities”.

Heathrow has already agreed that one hub will be based in Scotland in a Memorandum of Understanding with the Scottish Government.

The proposed hubs will pre-assemble components off-site before transporting them in consolidated loads to Heathrow as and when they are required.

Expansion programme director Phil Wilbraham is aiming for between 25% and 40% of the second runway scheme to be built offsite, and believes this will reduce the number of its peak on-site workforce from 14,000 to 10,000.

Heathrow chief executive John Holland-Kaye said: “Expanding Heathrow is a once-in-a-lifetime chance to really boost growth across Britain, and not just with more capacity at the nation’s hub airport, but from building it.

“More than100 communities across Britain have put themselves forward to host one of our pioneering logistics hubs and we couldn’t be more impressed by the applicants.

“Together we’ll build an expanded Heathrow, boosting growth outside London, leaving a world-class construction legacy for the UK and delivering expansion faster, cheaper and with less impact on our local communities.”