Driverless cars 'to free up land worth billions' 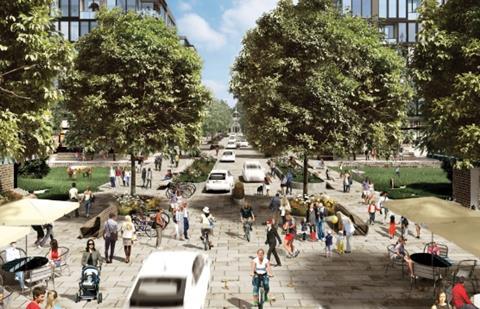 A report by WSP PB and Farrells has claimed driverless cars in Britain could free up developable land worth billions to build homes and offices.

The white paper claims that new developments designated as dedicated zones for shared driverless vehicle use could free up an extra 15-20% for other development compared to a typical urban layout.

Such zones would see shared-use driverless cars, owned by local authorities or developers, operate like car clubs or cycle hire schemes within a particular area of a city or district.

The extra land would be freed up because there would be virtually no car parking spaces needed, while the less complex roads required would also save space, the report claims.

Depending on scale, it says this could create the potential for thousands of additional homes and jobs as well as extra land for quality green and open spaces.

Referring to data from the communities department, the report claims a 100-hectare driverless car zone development in the heart of London could gain more than £1.25bn in additional land value uplift from the extra space, with a £300m uplift in outer London and £15-£75m across the rest of the country.

It also claims there would be no need for major infrastructure investment, as the vehicles could use urban roads without major change to the existing streetscape or city-wide infrastructure.

The report’s author, WSP PB development director Rachel Skinner, said each hectare of additional developable land would be worth “millions”.

She added: “Freeing up this land will create more viable developments that will increase housing and boost UK plc.

“Shared autonomous vehicles will require storage hubs, but not parking spaces. This means we can redesign our town squares, reclaim our driveways and build more densely in cities.”

Nigel Bidwell, partner at Farrells, said the transition to shared driverless cars “has already begun” and added: “These are visions for existing and familiar places. Many of the changes we need do not require an infrastructure revolution.”