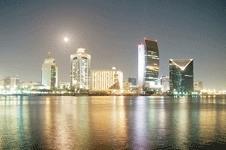 Dubai’s property companies will be the main beneficiaries of the $10bn bailout announced in the UAE on Sunday. The Dubai government has said the cash, which is coming from the UAE Central Bank through a bond arrangement, will be used to create a stimulus package to help property companies repay debts, restructure and cope with the slump in the real estate market.

The package is likely to include cuts in government fees and help for struggling real estate firms and small and medium-sized businesses.

Nasser Al Shaikh, director general of the Dubai Department of Finance, said that property companies would be among the first to receive this help. “We are working on the mechanism to allocate funds which are meant not only to meet refinancing obligations but also to sustain various development projects that are under way,” he said.

He added that the bond agreement was a sign of Dubai’s strength. “While many foreign observers continue to mistakenly see the UAE as distinct from Dubai, the reality is that the federation of the UAE has been built over 38 years of visionary leadership and unwavering commitment and continues to work with a single vision for development,” he said. “The message is that we live in one country and share a common destiny.”

Under the deal announced on Sunday the Dubai government has launched a five-year $20bn bond programme and the UAE Central Bank has subscribed to the first half of it.