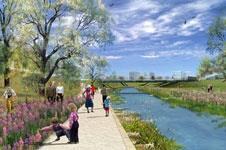 The Olympic Delivery Authority (ODA) has appointed Edmund Nuttall as landscape and public realm contractor for the northern end of the Olympic park.

BAM subsidiary Edmund Nuttall will procure and manage specialist subcontractors and suppliers to transform up to 40ha of industrial land into parkland, waterways and public spaces. The park has been landscaped by LDA Design and Hargreaves Associates.

The first specialist package, for trees and plants for the whole of the site, will be issued later this year.

John Hopkins, ODA head of parklands and public realm, said: “This is another important step towards the creation of the parklands that will both enhance the experience of the Games for spectators, athletes and TV viewers and leave a fantastic new green space in legacy.”

Edmund Nuttall has already been awarded the contract for civils, roads and bridges in the south end of the park.

The news comes as the ODA published its inclusive design strategy, which aims to make the Olympic park the most accessible and inclusive site in London.

The strategy sets out how inclusive design principles have been embedded into the ODA's procurement strategy for the Olympic park, venues and facilities.

It can be downloaded here.