HB Reavis scheme in Waterloo was given planning earlier this month

The developer behind a 31-storey tower that will replace Elizabeth House in Waterloo has confirmed it will manage the work itself.

HB Reavis won planning earlier this month for the scheme by AHMM which will see the 1960s block, designed by John Poulson Architects, torn down and replaced with three stepped buildings rising from 16 storeys to 31 storeys.

Chief executive Steven Skinner said it will act as construction manager on the job, having previously carried out the CM role on its other London jobs which include an office block next door to Farringdon station called Bloom. 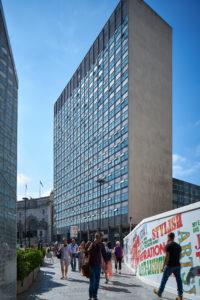 Elizabeth House (pictured) is currently home to around 2,500 employees across its 16 floors with HB Reavis expected to take vacant possession of the site next April.

The firm will only begin work once it has secured a section 106 agreement but the firm is looking to make a start on demolition by next autumn. Firms chasing this contract, which has an initial value of around £6m, include Keltbray, Erith and McGee.

The new building is due to be completed by autumn 2025. Gardiner & Theobald is helping carry out QS services alongside HB Reavis’s in-house team.

Designed by John Robertson Architects, Bloom is due to finish at the end of next year and will be the fourth of the HB Reavis’s London schemes to complete.