Manhattan’s Empire State Building is leaking air and carbon by the tonne. But a project to reduce heat loss and solar gain from its 6,514 windows has raised its green credentials - and drastically lowered its energy bill

New York city’s tallest building could soon be one of its greenest if a £12.5m retrofit programme goes to plan. The owners of the 102-storey Empire State Building are hoping to cut its carbon emissions by 38% and shave £2.8m off its £6.7m annual energy bill. What’s motivating them is the desire to prove that energy-efficient retrofits are economically viable and can be replicated on other buildings. It’s an attractive proposition and (another big motivation for owner, Malkin Holdings) it should also help attract tenants to the art deco landmark, which has of late lost some of its lustre.

There are eight projects under way as part of the upgrade, each of which contributes between 2% and 8% of the overall saving. One of these involves the windows, and it will be completed next month.

It’s a mammoth task. There are 6,514 of them in the building, which was originally designed to be naturally ventilated and was fitter with single-glazed timber sashes. These were last replaced about 17 years ago, with double-glazed, aluminium sash units. Physically, they are in good shape; the downside is their thermal performance. In the US, windows are normally described by their resistance to heat flow, or their R-value, as opposed to U-value scale, which measures heat flow. The higher the R-value, the more insulating and better performing the window; the aim is to improve this fourfold.

Dana Schneider of Jones Lang LaSalle, who is managing the retrofit, says when the team began analysing the project they wanted to take a holistic approach that included optimising the performance of the envelope as well as the building services and tenant behaviour. “That way we could reduce the load on the building and the infrastructure systems needed to support it,” she says.

A key part of the project, however, was to build the business case for eco retrofits and find the best balance between the financial investment and carbon reduction. Ripping out the windows and replacing them with new, high-performance units was an option, but it would have been expensive and disruptive. Plus, the old windows and frames still had plenty of life left in them. 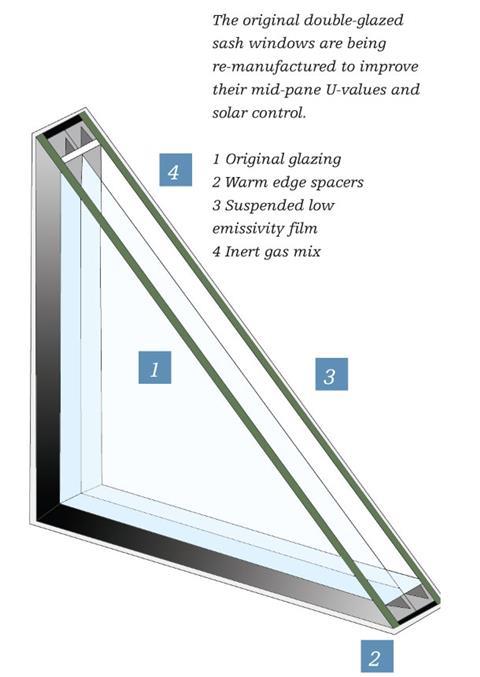 Instead, the design team hit on the idea of “re-manufacturing” them. This offered a cost-effective way of improving the centre pane U-value and cutting solar gain by increasing the solar heat gain coefficient. Together with improving the seals around the windows, it was calculated that 5% could be shaved off energy use and the payback period would lie within the 15-year target.

According to Schneider, nothing like this had been done before and certainly not on this scale. On the fifth floor of the tower a processing workshop has been set up, partly to cut down on the carbon associated with transportation. The windows are being upgraded by Serious Materials. The process involves taking the sashes out of their frames and replacing them with a temporary window, a procedure which takes a matter of minutes and can be done out of office hours. They are then taken to the workshop where they are disassembled and the glass cleaned and inspected for chips or cracks. About 97% of the glass is being reused.

A new super-insulating glass unit is then created by taking one of the original panes of clear uncoated glass, laying a warm edge spacer on to it and then a suspended low-emissivity film which acts to cut down the solar gain and the load on the air-conditioning system. Another edge spacer is added before the outer pane of glass is laid on top, creating what is effectively a triple-glazed unit of the same thickness and weight as the original double-glazing. The assembly is then baked in an oven for about 90 minutes which shrinks the film, making it taut, and turning it translucent. The last step is to inject a mix of krypton and argon into the two voids to improve the U-value. Before it is reinstalled, new sealing strips are applied to cut down on infiltration.

The procedure allows the original glass to be recycled and frames reused, and takes the windows from an R2 rating (a U-value of 0.5W/m2K) to R8 (a U-value of 0.125W/m2K), while halving solar gain. Ultimately it should save 1,150 tonnes of CO2 a year and knock more than £250,000 off the building’s annual energy bill. With 43% of all office space in New York City built before 1945, it should be an example others will follow.