Architect says initiative is ‘a risk’ over sustained period

The firm said its 60 staff have swapped their London office at Banner Street, near Old Street roundabout, for their living rooms since the government put the country into lockdown more than four weeks ago. 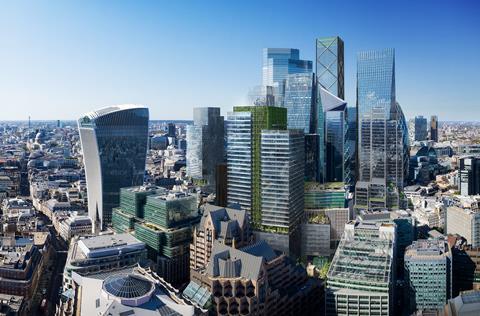 But in a note accompanying the firm’s latest report and accounts, signed off by Parry himself on 9 April, the practice said: “We have managed to maintain home working for the entire staff. A risk however remains of maintaining continued productivity in this form of working over any longer duration.”

Earlier this week, the government’s chief medical officer Prof Chris Whitty said social distancing would need to remain in place until at least the end of the year.

The practice, which is working on developer Lodha’s No 1 Grosvenor Square luxury residential scheme in Mayfair, being built by Mace, and the next phase of Qatari Diar’s Chelsea Barracks residential job being built by Multiplex, scraped back into the black last year with a pre-tax profit of just over £4,000 from a £1.3m loss in 2018.

The firm is also behind a 36-storey office building (pictured) with a living green wall running all the way up it which went into City of London planners just before last Christmas.