Labour has warned a Brexit could mean the loss of 18,000 new affordable homes over the next four years. The figures are based on IFS forecasts that a vote to leave the EU could mean a budget deficit between £20bn and £40bn higher than presently forecast - and Labour argues past experience suggests the Chancellor George Osborne will cut capital budgets first if put under fiscal pressure. Figures based on new House of Commons Library research commissioned by Labour finds the Department for Communities and Local Government, which is responsible for housing, is likely to see its current budget cut by between £550m and £1.1bn. This is enough to fund between 9,000 and 18,000 new affordable homes by 2020. 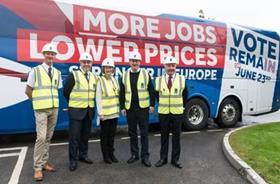 Prime minister David Cameron and housing minister Brandon Lewis have visited Crest Nicholson’s Tadpole Garden Village development in Swindon on the final day before the EU Referendum to argue the importance of remaining in the EU to ensure a stable housing market in the UK. Stephen Stone, chief executive of Crest Nicholson, commented: “Homebuyers have confidence of future employment and easy access to mortgages, which helps them come to the decision to buy a new home. This is the housing environment today and anything which undermines it - including Brexit - would not be welcomed and could force us to revisit our investment decisions.”

Galliard Homes has issued a letter to all its clients, suppliers and contacts highlighting the company supports the Remain campaign. Don O Sullivan, managing director at Galliard Homes, says: “This is clearly a big decision for all, with many competing factors and issues but we at Galliard Homes strongly believe that it is better for the short and long term growth of the London economy and the wider UK for the country to remain within the EU.”

The media has been chewing over the clashes on the BBC’s ‘Great Debate’ on the EU Referendum last night, which pitted Scottish Conservative leader Ruth Davidson, London mayor Sadiq Khan and TUC general secretary Frances O’Grady for Remain, against Conservative MPs Boris Johnson and Andrea Leadsom and Labour MP Gisela Stuart for Leave. A snap YouGov poll for the Times found 39% thought Leave had won it, over 34% for Remain, while 17% didn’t know. Here’s the Guardian’s take, and the Telegraph’s.

Meanwhile, 1,200 business leaders - including more that half the leaders of the FTSE 100 - have written to the Times backing Remain. Tony Pidgley, founder of Berkeley Group, is among them. In the joint letter, the bosses say: “We know our firms are stronger in Europe. Our reasons are straightforward: businesses and their employees benefit massively from being able to trade inside the world’s largest single market without barriers.” More here from the BBC. Elsehwere in the Times, Sir George Iacobescu, refugee who built Canary Wharf, warns on demonisation of immigrants.

Prime Minister David Cameron has made a direct appeal to older voters ahead of the referendum, urging them to think about the “hopes and dreams” of their children and grandchildren and vote to remain in the EU.

In a ten minute statement outside 10 Downing Street, Cameron said jobs and family finances would be at risk if Britain votes to leave, and added that future generations would not be able to reverse the decision. He said: “If we vote out, that’s it. It is irreversible. We will leave Europe for good, and the next generation will have to live with the consequences far longer than the rest of us.”

But Matthew Elliott, chief executive of Vote Leave, said a vote to leave the EU on Thursday would be a “vote for democracy” and a vote for a “more prosperous future”.

Another high-profile firm has backed Building’s campaign to remain in the EU. Rogers Stirk Harbour + Partners got in touch to back “Building Says IN” and told Building a Brexit would be “catastrophic” in its impact on the UK’s construction industry and the economy. More than 40% of its staff are non-British EU citizens, and the firm said a “significant proportion” of its work is currently situated within the EU. It said a Brexit would leave Britain “culturally, socially and environmentally impoverished.”

Other new signatories include Paul Flatt, group chairman and CEO of Hurley Palmer Flatt, and Chris Lacey, chief executive of the William Lacey Group, who have both signed up as individuals. Supporters of Building’s campaign also include the EMEA division of the world’s fourth biggest architect, Perkins + Will, as well as big name contractors Carillion, Mace, Willmott Dixon and ISG.

Writing in the Guardian, well-known investor George Soros has warned of a ‘Brexit Black Friday’ if it emerges on Friday that Britain has voted to leave the EU. He said the pound would plummet in the event of a Brexit, falling by at least 15% against the dollar and possibly by more than 20%. Quoting studies from the Bank of England, the Institute of Fiscal Studies and the International Monetary Fund, he added that households could between £3,000 and £5,000 worse off annually.

It is worth pointing out though that yesterday the pound made its biggest jump against the dollar in seven years, hitting $1.4693 – the biggest one-day gain since March 2009.

As pointed out in our feature this week, a big fall in the pound could hit contractors hard, with the price of construction materials rising. According to Core Five’s James Clark, writing for Building two weeks ago, the pound fell 5% against the euro due to the uncertainty over the referendum. A government study from 2010 showed that 64% of all construction materials imported into the UK came from the EU.

With two days to go, both sides of the campaign are really ramping up now with some big hitters wading into the debate. Aside from the huge news about David Beckham backing a remain vote, the prime minister’s former strategy director Steve Hilton has come out saying David Cameron was told “explicitly and directly” in 2012 that his immigration pledge was “impossible” if the UK remained in the EU.

One of Cameron’s closest aides until he left government in May 2012, Hilton said Cameron was told by “expert officials” that the government could not meet its target to cut net migration to below 100,000 – due to the EU’s freedom of movement rules. The PM insists that immigration can be controlled better if the UK remains in the EU, due to the four-year welfare and in-work benefit cuts for EU migrants.

Of course for construction migrant labour is vital in plugging the skills gap, with various figures from the government, the CIOB and the CITB proving that point. But the BBC’s business editor Simon Jack points out that some contractors believe higher wages would tempt more British nationals into the industry and that’s how a labour market should work, instead of relying on a limitless supply of cheap labour.

What impact might Brexit have on the construction supply chain? Scape has got in touch to highlight the potential threats. The contracting authority has conducted a survey of 150 professionals within the sector, which found widespread concerns about skills shortages and market uncertainties. When questioned about what makes a sustainable supply chain, 72% of construction companies and consultants said that stability is the most important element and 79% of public sector bodies agreed. Meanwhile, 55% highlighted the skills shortage as one of the biggest barriers to a healthy supply chain, and 39% see the shortage negatively impacting their ability to keep to budget - with 9% listing this as critical. Scape chief executive Mark Robinson contends the referendum is already making these problems worse: “Whether we leave or remain in the EU, the debate itself is creating procrastination, insecurity surrounding publically funded schemes, and threatens to compound a dire skills shortage.”

Elsewhere on Building.co.uk this morning, Sweett’s Cora Marler blogs on whether Brexit would really slash procurement red tape, as many in the Leave camp have argued. Is the grass actually likely to be greener?

This may not grab the national headlines like Baroness Warsi’s conversion to Remain earlier, but Building’s contributing editor Dave Rogers – who had been banging the Leave drum, as those who know him will testify – has reluctantly come down on the side of Remain ahead of Thursday’s referendum. He blogs about his conversion here – it’s worth a read, I’m sure his lukewarm embrace of the EU will chime with many.

Attention has turned away from the campaign trail to the House of Commons, where MPs are paying heartfelt tributes to Jo Cox MP, who was killed after her constituency surgery in Birstall, Yorkshire last Thursday. Labour leader Jeremy Corbyn said those in the chamber were “united in grief at her loss”, adding: “We can come together to change our politics, to tolerate a little more and condemn a little less.” David Cameron paid tribute to a “loving, determined” politician. The Guardian is covering MPs’ tributes in full here.

Welsh first minister Carwyn Jones has warned that important infrastructure projects in the country could be scrapped in the event of a Brexit. Out campaigning in Pontypridd today, Jones said work to improve train lines in the area would simply stop on Friday if the UK votes to leave.

And doing a bit of digging, it seems there are a lot of Welsh infrastructure projects which could be under threat if we leave. Around £150m in EU funds are ear-marked for a South Wales metro system, while £85m of EU funds are set to be invested for sections of the A40 in South West Wales and the A55 in North Wales.

Hello, and welcome to Building’s rolling coverage of the EU referendum campaigns ahead of Thursday’s crucial vote. We kick off the blog with the news that contractor Osborne has become the latest heavyweight firm to back Building’s remain in the EU campaign, ‘Building says IN’, alongside a number of individuals.

In the main campaigns, the day began with news that Conservative peer Sayeeda Warsi had quit the leave campaign, accusing lead Brexit campaigner Michael Gove of spreading “complete lies about Turkey’s accession to the EU”.