Excavation may have caused Shanghai collapse 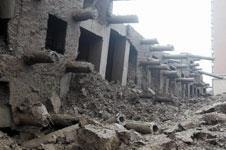 The collapse of a 13-storey block of flats in Shanghai could have been the result of an excavation close to the building’s unreinforced concrete piles, according to a leading specialist.

It is understood workers were excavating beneath the block at the Lotus Riverside development to make space for an underground car park at the time of the collapse. The spoil from the excavation was piled up alongside the building.

Viv Troughton, technical director at foundation and piling specialist Stent, says it looks like the piles are precast concrete pipes, which are quite common in the Far East and are often unreinforced.

According to Troughton it seems there has been a rotational failure in the ground which could be because of the excavation beneath the building.

With little or no reinforcement in the piles, they wouldn’t be able to resist the lateral loads and as a result have sheared.

“I have seen this type of failure in an earthquake where the soil has liquefied but never before seen it as a one-off failure where there is no evidence of damage elsewhere,” says Troughton.

One construction worker was killed when the building collapsed last Saturday. Nine people are being held by the Chinese authorities as an investigation is carried out into the causes.