Another package of work on a super-prime residential scheme in Mayfair masterminded by billionaire John Caudwell has been awarded.

The Audley Square development from Caudwell – best known as founder of the retailer Phones4U – will include five townhouses, three penthouses, a mews home and 21 flats. It has been drawn up by Robert AM Stern Architects, the New York architect behind 15 Central Park West, which is considered one of Manhattan’s most desirable addresses. Technical architect on the job is EPR.

The site, which was once home to a petrol station, car park and aparthotel, was cleared by Cantillon with Careys set to finish the substructure and superstructure work, thought to be worth around £60m, next month.

London façade stone and marble specialist EDM, which last year posted a turnover of just over £14m, down from £18.5m after being hit by shutdowns caused by covid, will build the façade of the development which will include balustrades, ornamental fretwork etched onto the frontage and curved balconies.

The scheme, which is being marketed to rival super-prime schemes such as RSHP’s One Hyde Park, built by Laing O’Rourke, is set to be eight storeys at its highest point and is extended by five basement levels.

A Caudwell spokesperson said Careys is the principal contractor on the basement box and concrete frame with a main contractor due to be appointed later this year for the shell and core.

Gardiner & Theobald is the QS and employer’s agent while others working on the scheme include structural engineer Arup and M&E consultant Hoare Lea.

Caudwell sold Phones4U in 2006 for £1.24bn and was listed as having a personal fortune of £1.56bn in last year’s Sunday Times Rich List. 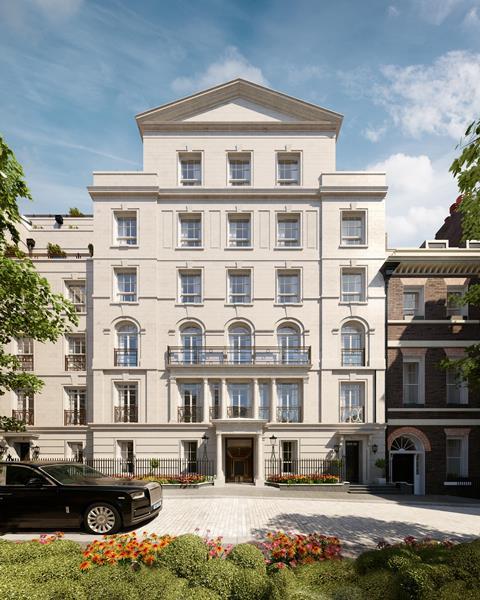 How the Audley Square scheme will look when completed