Terry Starr was in charge of construction at high-profile scheme 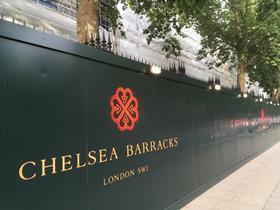 Contractors have been left in the dark over whether Qatari Diar will replace the man previously responsible for running its Chelsea Barracks scheme.

Mace is carrying out work on the first three phases of the job, with the firm one of two, along with Multiplex, working up bids for the stalled £200m fourth phase of the luxury development.

Construction director Terry Starr was in charge of the scheme for the developer and had been lined up to take over running its job to turn the former US Embassy in London’s Grosvenor Square into a new hotel, designed by David Chipperfield.

He joined Qatari Diar nine years ago and has been working on the Chelsea scheme since 2008, having been construction director for original developer Candy & Candy.

But he has now quietly left the job. One source said: “He went a few months ago and there’s been no replacement as such. He’s a very good guy.” Another admitted he had “no idea” where Starr had gone.

While the reasons for Starr’s departure are unclear, Qatari Diar had been extolling his credentials for the job. In the third edition of The Barracks, the biannual Chelsea Barracks residents’ book produced by the firm, Starr – who also worked for Bechtel and Sir Robert McAlpine – was described as having worked “on some of the world’s greatest feats of construction”.

Published in summer 2017, it added: “His role as executive director of construction sees him tasked with the delivery of Chelsea Barracks. As big a feat as this may be, Terry is no stranger to working on large-scale and complex developments.”