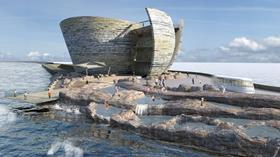 Fears for the wellbeing of salmon and trout are causing further delays to the troubled £1bn Swansea Bay tidal lagoon scheme, according to specialist fish lawyers.

In addition to well-publicised delays to subsidy negotiations with the government, the client Tidal Lagoon Power is also struggling to obtain a marine licence from regulators – which is needed for the project to go ahead – due to concerns for local fish populations.

Campaign group Fish Legal has obtained an internal briefing note from regulator Natural Resource Wales, dated March, that states the project has not yet been granted a marine licence. It was widely thought a marine licence had already been granted. The regulator said assessing the impact on fisheries “may add a significant number of months to the process”.

Main works on the £1bn project have already been pushed back from spring 2016 to spring 2017 due to negotiations over a strike price - the amount of subsidy paid by the government for electricity generated.

Fish Legal chief executive Mark Lloyd told Building the main issue concerning Natural Resource Wales centres on three rivers around the lagoon filled with highly sought after trout and salmon, which will be “in danger of being sucked through the turbines and chopped up”.

Asked when a decision to grant a licence was likely to be made, Lloyd said: “My feeling is Natural Resource Wales is trying to put off the marine licence until the end of the [government] review [into tidal lagoons policy].”

He added: “Normally a decision takes weeks or a couple of months. Tidal Lagoon Power submitted their application a few months ago and it is taking a lot longer than usual, which is indicative of the problems they are having.”

It has also emerged strike price negotiations are no closer to being completed after Fish Legal obtained a separate letter from energy secretary Amber Rudd to Mark Shorrock, the chief executive of the project’s developer Tidal Lagoon Power, revealing the government has already rejected a strike price offer.

Rudd’s letter, dated 10 February and obtained under the Freedom of Information Act, said Tidal Lagoon Power’s strike price offer was a “significant deviation from the basis upon which we started this bilateral negotiation process”. She confirmed the government would not “respond formally” to an offer until its review into tidal lagoons policy is completed - not expected until the autumn.

In response to the briefing note obtained by Fish Legal, a Tidal Lagoon Power spokesperson said: “We continue to work with government on an efficient financing structure for tidal lagoons while also progressing discharge conditions with the relevant authorities.”

The Department of Energy and Climate Change declined to comment.