Five things to know before going to Libya 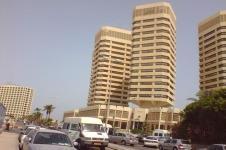 Could Libya be a refuge for construction companies trying to escape collapsed markets? Perhaps if you follow these tips ...

"Why on earth are you going to Libya?" If only I had a Dinar for every time I heard that a couple of years ago.

And this view wasn't entirely unjustified. As recently as 2007, hotels were so scarce that rooms needed to be booked months in advance. Even then, you could often only get one at a time, and so two or three of our guys (usually accustomed to the finer things in life) would be crammed into a single room together.

Libya's infrastructure and amenities have certainly progressed since then, and quickly. The country is fast becoming a thriving, international hub for construction firms, offering a rare opportunity to counter the gloom of some home markets and the downturn in other, once-booming locations, like Dubai. While it still isn't an easy market to operate in, it can certainly be rewarding. Here are a few useful things to know before going there ...

The scale of development is surprising

Libya is undoubtedly a country on the up that is investing in the right places, with large-scale infrastructure, education, transport and housing initiatives being undertaken across the country. The scale of these projects is often substantial. One of our recent deals in Libya was to service a programme to build 18 university campuses. This was followed by a deal to service a nationwide scheme to improve housing, roads, bridges and utilities. Needless to say, there are few markets in the world currently pushing ahead with developments like these.

Being there can open doors to other markets

Similar to Hong Kong and Dubai in recent years, the projects in Libya often involve contractors and consultants from around the world. On the university campus developments, contractors from Portugal, Spain, Italy, Turkey and China have been engaged - the first projects in Libya for most of them. Just last week, South Korean builder Daewoo Engineering & Construction announced that it had won a US$227m project to build a resort complex in Tripoli. This can create great networking opportunities - it was through our exposure to a large US firm in Libya that we were able to win our first business with them in the United States

There may be a lot of activity in Libya, but don't expect everything to run at full speed. The administrative system is still taking time, with simple processes often involving many manual steps. For example, we still can't get many of our customers to transfer money directly into our Libyan bank account. Instead, we go to the customer and collect a cheque for the correct amount, which we then physically take to the bank, where it takes 13 days to clear. In general, decisions take a long time to make, and even then are prone to change.

Hire locals and be local

To manage these administrative aspects, and understand the dynamics of Libyan state agencies, which oversee much of the construction and infrastructure work, it is important to have locals managing the relationships in the country. A purely expat approach won't give you the contacts or the street-smarts that you need.

To hire locals, issue visas to expats and bid for work on government projects, you need to register a company there. This takes a lot of time and dedication, so you need to be willing to invest for the long haul. We were told from the start that we would only be considered for government infrastructure programmes if we had a Libyan registered company with Libyan staff.

It's getting better, but Tripoli's entertainment offering is still somewhat sparse for visitors. Far from being a problem, this creates an opportunity to throw your own soirée. Something we've had a great response to is the barbeque evenings we hold every few weeks in the garden of our office villa. Usually about 20 to 30 people attend and have a great time swapping stories and making new friends and business contacts. Next time you're in town, let us know and we'll send you an invite!

Yuval Attias is a regional manager at Aconex, a provider of project collaboration solutions to the construction and engineering industries