Footballers turned developers Gary Neville and Ryan Giggs have bowed to pressure from heritage groups and promised to look again at their plans by Make for a pair of towers in Manchester.

Government advisory body Historic England was the latest to flag up worries about the plans which were submitted to Manchester city council at the end of last month.

Catherine Dewar, Historic England’s planning director for the north-west, said: “We are deeply concerned about how this scheme would affect some of Manchester’s most precious heritage.

“It would have an impact on people’s appreciation and experience of the stunning town hall and library but it would also erase different layers of this area’s history, irreparably damaging the special character of the surrounding conservation area.”

Save Britain’s Heritage has also rubbished the scheme calling it “a town planning disaster of a magnitude not seen in decades” while the Twentieth Century Society also raised concerns about the plans which, as well as sitting in the Deansgate and Peter Street Conservation Areas, will be built next door to the Albert Square and St Peter’s Square Conservation Areas.

Speaking at the Mipim property fair in Cannes, Neville said: “Manchester deserves a world class development, like St. Michael’s. We believe that in a city that aspires to be global, the best of old and best of new can live together, however we are going to make further refinements – it has to be perfect for Manchester.”

A spokeswoman for the developer said it planned to make a second announcement on what the changes will be “soon”.

The changes will be the second amendments to a scheme that was first unveiled last summer.

Earlier this year, Neville said it listened to concerns after the proposals were published with a new scheme unveiled showing the main change in the appearance of the two towers – which swapped a black façade for an anodised bronze one.

Historic England said the design, height and colour of the current development would dominate the Deansgate and Peter Street Conservation Area and “dwarf the nationally important” Central Library and grade I listed town hall.

The £140 million city centre site, originally known as Jackson’s Row but now called St Michael’s, will include a brace of connected towers. This will be carried out by Chinese contractor Beijing Construction Engineering Group International.

Work will involve demolishing the Manchester Reform Synagogue, built in 1953, and Bootle Street Police Station, built in 1937. A pub, the Sir Ralph Abercromby, which dates back to the early nineteenth century, has also been slated for the wrecking ball. 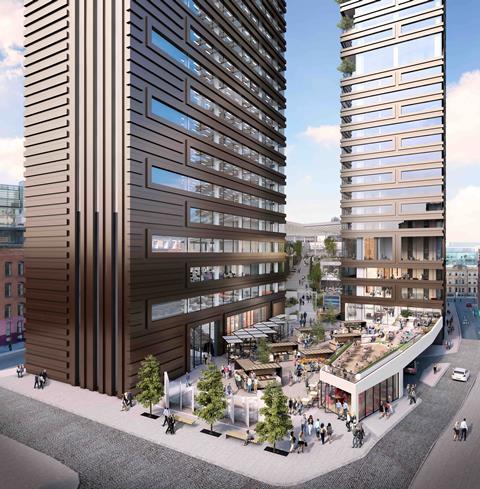 The scheme has changed colour from black to anodised bronze