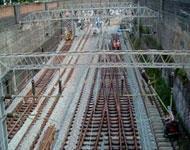 A footbridge near Loughborough collapsed this morning after a railway lorry struck it.

A train from Nottingham to Norwich consequently collided with the debris from the collapse and derailed, leaving its driver severely injured.

The British Transport Police said the driver sustained deep lacerations to his legs and was rushed to Leicester Royal Infirmary hospital. Among the six passengers on the train, one reported a minor injury.

The Rail Accidents Investigation Branch are currently at the scene and are investigating the incident.