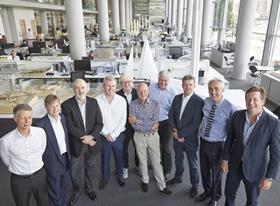 The ownership of Foster + Partners has been brought back in-house after the firm bought out the stake which has been held by private equity firm 3i since 2007.

No figure was ever put on the deal when Foster’s sold a 40% stake to 3i to help finance growth at the business - although 3i said this week the return on its investment was close to £150m. It said this was 1.8 times more than its original stake meaning the amount it pumped in was at least £80m.

At the time of the deal, turnover at Foster’s was £50m which, according to its last set of published results for the year to April 2013, had jumped threefold to £153m.

Just over 20% of Foster’s business was in the US and Asia back in 2007 with the two regions now accounting for more than half of its revenues.

This week chairman Norman Foster said: “We have enjoyed an excellent relationship with 3i over the last seven years.

“They have helped us on a number of fronts including strategy, investment in research, governance, planning, accessing new markets and bringing best practice to the way we manage our business.”

A company spokesperson said the buy-back was financed by cash from the firm’s “strong balance sheet”.

All partners will now be shareholders, increasing share ownership from 80 to all 140 partners, Foster added. Foster said the business will now be led by a new partnership board comprising himself as well as acting managing partner Matthew Streets, joint heads of design Spencer de Grey and DavidNelson, and design directors Stefan Behling, Grant Brooker, Nigel Dancey, Gerard Evenden, Luke Fox and David Summerfield.

3i said it had been paid £70m in cash for its stake which, together with loan repayments and a deferred payment of £40m, took the amount it received from its investment to £148m.

The move comes after Foster + Partners wrote down the value of its business by nearly £130m in its latest results for the year to 30 April 2013, after it revised forecasts for its international division.

The accounts said the revaluation of the company was prepared as part of management discussions concerning a potential “financial restructuring”.

Earlier this year, chief executive Mouzhan Majidi left the business after the firm decided to do away with his role.