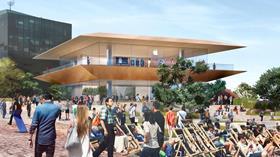 The original design of Foster’s Apple store in Melbourne.

Plans to demolish part of Australian landmark Federation Square in Melbourne to make way for a new Apple store designed by Foster + Partners have been pushed back by a year.

A move by heritage group Heritage Victoria to recommend the civic space be added to the heritage register is thought to have delayed the project.

The scheme has faced a public backlash since it was first announced in 2017, leading to Foster’s releasing a revised vision of the scheme in July.

Even if the city landmark is added to the register it would not stop the Yarra Building, the structure which will make way for the store, being demolished but could add an extra layer of difficulty for Apple.

On a positive note for the scheme, Victorian premier Daniel Andrews, who was re-elected last week, told Melbourne-based newspaper The Age he still supported the project.

Andrews said: “My position has always been: ‘Do we really want this thing to go to Sydney and all the jobs and all the opportunities that come from it?’ That’s not my view.”

Despite this, two ministers who drove the Apple plan in Andrews’ first cabinet, John Eren and Philip Dalidakis, either quit or have been dumped to the backbench since the election.