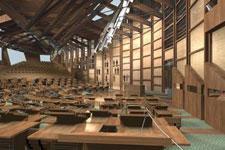 Oak poles in the building’s facade will have to be taken down, while water pours through roof

Up to 1,000 of the iconic oak poles that form part of the facade of the £430m Scottish parliament are to be taken down to be renewed or repaired.

The latest problem to affect the building comes as a team of specialists are carrying out repairs to its roof, which has been allowing water to pour into a number of internal areas.

The construction of the parliament, designed by Catalan architect Enric Miralles, was elevated to the status of a national scandal four years ago after it was completed three years late and 10 times over budget.

Last year it emerged that the maintenance of the building was costing about £1m a year. It is understood that the additional work to repair the leaking roof and the work on the oak poles will be an extra cost, although it is unclear how much this will be.

During the parliament’s February recess an estimated £115,000 worth of work was carried out to repair and replace flooring and blinds.

A source at the parliament said: “The desperate rush to get the parliament open before the work was properly finished means we have a never-ending snagging list. The poles were capped but the caps haven’t done their job – the Scottish rain has taken its toll.”

He added: “It’s a lot of work. Not all of the poles will need to be replaced but nearly all of them need a makeover.”

A spokesperson for the Scottish parliament said: “We’ll be carrying out work to extend the lifetime of the coatings on the oak lattice, which has weathered. We’re testing types of resin.”