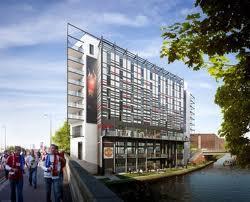 DBK is the cost consultant and Shepherd Gilmour is the engineer. According to construction database Barbour/ABI, the contract is worth £12m.

Work will begin imminently and the hotel is scheduled to open in Spring 2014.

Galliford Try overcame competition from McLaren – which emerged as favourites for the job last month before falling out of the race – and Bam Construct and Bowmer & Kirkland.

Neville is developing the scheme in joint venture with the Old Trafford Supporters Club.

The development will be built in the shadow of Manchester United’s 76,000-seater Old Trafford stadium.

The scheme won planning last May, despite opposition from Manchester United FC, which submitted a document to the council arguing the hotel would obstruct views in the area.

But planners rejected United’s claims and said the development will “support economic growth”.

Neville has said he will be funding the project using money generated by his testimonial match against Juventus in May 2011 ‘to say thank you’ to United’s fans.