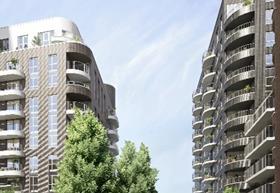 Works will be undertaken over a three-year period. They will include the demolition of derelict buildings to make way for a new neighbourhood consisting of 605 homes – 242 (40%) of which will be affordable – and 38,000ft2 of commercial space to accommodate mainly small and local businesses.

The remaining homes will be one, two and three bedroom apartments for rent. All homes will remain under the ownership of Genesis and QPR and none will be sold.

Work will being next month with the first residents moving into the new properties from September 2020.

The Oaklands site is located on the western part of the Old Oak and Park Royal regeneration area, south of the Grand Union Canal. It is currently a vacant site and has been unoccupied for a decade.

Stephen Teagle, chief executive of Galliford Try Partnerships, said: “This contract adds to our growing order book across all regions and underlines our accelerated delivery programme for the provision of affordable homes across London, bringing the total value of contracts awarded to our south- east business unit during the last quarter to over £430m.”

A new station for HS2 and Crossrail will be built. The plans also include new London Overground stations, as well as increasing the capacity of existing stations at Willesden Junction and North Acton.