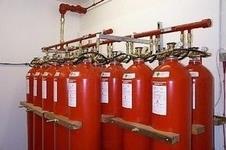 Hertfordshire Fire and Rescue has confirmed that a gas cylinder was the cause of an explosion at a site in Hertfordshire that left one man dead and seven others injured.

An argonite cylinder that had just been delivered to the site ruptured and exploded on on Wednesday afternoon. Laing O'Rourke subsidiary Crown House Data Solutions was working on the site, a data centre scheme at Welwyn Garden City for an unnamed client.

It is believed that the cylinders were being installed in the building as part of its fire protection.

The man who was killed has not been named, although police have informed his relatives. One of the two men seriously injured in the incident was due to be released yesterday, but police confirmed that the other remains in a critical condition. The five other workers were treated and discharged.

Liam Cummins, managing director of Crown House, said yesterday: “This is a tragic event and our thoughts are with the family of our colleague who has tragically lost his life and with those who have been injured.

“I would also like to pay tribute to the emergency services who displayed exemplary professionalism in dealing with this incident.”

Police and the Health and Safety Executive are continuing investigations alongside the fire brigade.