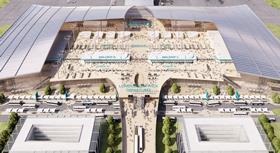 Gatwick Airport has appointed a ‘carbon tsar’ to help it become the UK’s leading low carbon airport by 2025, as it attempts to out-green its main rival Heathrow in the battle to build a new runway in the South-east.

Simon Sturgis – managing director of architect Sturgis Carbon Profiling – will publish a strategy later this year aiming to demonstrate how future construction at Gatwick, including its second runway plans, can be sustainable and generate as low a carbon footprint as possible.

Both Gatwick and Heathrow’s proposals for new runways are being closely scrutinised to ensure they have a minimal carbon impact.

The strategy is meant to build on Gatwick’s existing target of reducing carbon emissions, compared to 1990 levels, by 50% in 2020.

Sturgis is due to take up his new role this month.

He said: “I am very excited at the scale and commitment of Gatwick’s carbon reduction ambitions.

“Their plans are significant, imaginative and ground breaking and the leadership they are showing has the potential to be game changing for carbon reduction across the UK.”

Gatwick Airport CEO Stewart Wingate said: “Carbon used in construction is often a hidden cost to the environment, but we know it is a significant contributor to an airport’s environmental footprint.

“I’m delighted that Simon has come on board and will help us reduce our carbon impact across the full range of activities so we can become the most sustainable airport around.”

It comes after prime minister David Cameron delayed making a decision on the location of a new runway in the south east over concerns regarding air quality and carbon emissions.

Heathrow, which was backed by the Davies Commission, insists it can meet the government’s carbon emissions target if it is chosen for a third runway.

Its chief executive John Holland Kaye said: “Heathrow expansion is not a choice between the economy or the environment - we can deliver both.”

He added that the airport could boost the economy, create apprenticeships and jobs “while ensuring we remove people from our noise footprint and meet both EU air quality limits and carbon targets.”