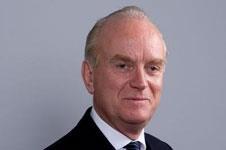 WSP sought a merger as it was unable to expand quickly enough as a UK-listed company, its chief executive Chris Cole has said.

Cole said the acquisition of the company by Canadian consultant Genivar would allow the combined Toronto-listed firm to expand through acquisitions, particularly in the US and Australia.

He said it made sense to align WSP - which he founded in 1969 - to the “powerhouse” of the Canadian economy rather than the “languishing” UK market.

Genivar is less than two-thirds the size of WSP in terms of staff numbers and turnover but, at the time of the deal, had a market value of £516m - more than three times that of WSP, which was valued at just £166m.

Cole said: “This transaction gives us the ability to grow because we’ve got a new financial structure and new valuation. That’s what the Canadians bring to the party and that’s what the UK hasn’t got any more.

“A healthy business is a business that does a blend of organic growth and acquisitions and we haven’t made an acquisition since the liquidity crisis of 2008.”

Cole said the company “needed to increase numbers” in Australia. “We have wanted to grow these businesses in Australia and the US, and now we have that opportunity.”

Cole declined to say how much money the combined firm might have to spend, and added that the group would wait to let the “dust settle” following the merger before embarking upon further acquisitive expansion.

He said the deal was done in the “spirit of a merger”, despite the fact that Genivar acquired WSP, and claimed that the similar sizes of the firms
would help them to integrate.

He said: “I’ve seen how companies get damaged [when they’re acquired by much larger firms] but that won’t happen because of the relative scales of the companies and because management remains.” 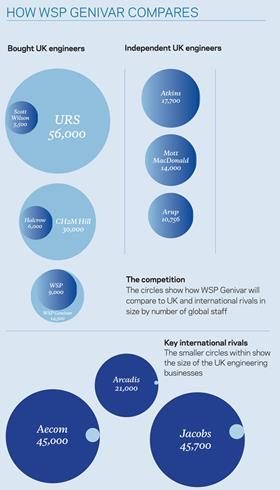 He said: “I believe WSP needed to be part of [the consolidation trend] to grow and that’s what we’ve achieved.”

Cole said there would be no job losses as there was “no geographical overlap whatsoever” between WSP and Genivar. WSP has 9,000 staff and aturnover of £717m, whereas Genivar has just 5,500 staff.

Cole added that he had considered the emotional aspect of selling another UK consultant to an overseas buyer as he was “only human” but arguethe Genivar tie-up had provided an “exceptional opportunity”.

Cole said: “Canada was clearly an attraction - it’s probably the strongest economy in the Northern hemisphere. We’re fortunate to have another country - Sweden - as part of the group so we believe the group is now operating in the two strongest economies.”

When completed the deal will see Genivar pay £278m to buy the entire issued share capital of WSP, with the combined group to be renamed WSP Genivar. Cole said the name change would come into effect “as soon as is practical following completion of the merger”.