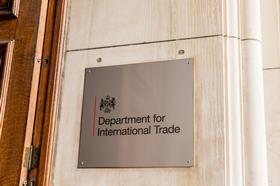 The government has been holding meetings with several construction businesses about exporting the UK’s expertise in smart construction such as BIM, Building can reveal.

The Department for International Trade (DIT) wants to increase the UK’s share of the global smart construction market and in its Construction 2025 document, published six years ago, told the industry it wanted to see it being more proactive about exporting its skills.

It said: “The construction industry needs to position itself at the forefront of smart construction and digital design by driving forward the Digital Built Britain agenda. If it doesn’t, the UK will be left behind.”

The DIT has also been speaking to the Centre for Digital Built Britain about export opportunities.

Phil Southgate, managing director for Gleeds’ building surveying division and one of the firms involved in the discussions, told Building: “Because [Gleeds] is a fairly leading party in terms of BIM in the UK, they’re talking to us and we’re supporting them in terms of that.”

He added: “They’ve started with a fairly high level of engagement with [overseas countries] as opposed to saying ‘we’ll bring best practice’ but there’s no hiding from the fact they’re saying ‘we want to sell UK construction to you’.

“They’ve not shared a particular strategy at the moment in terms of targeting anywhere in particular – it’s a case of push the doors and see which ones open.”

But he said one of the DIT strategies is expected to involve sending out UK staff to provide practical support on major infrastructure projects.

“My guess would be staff going out from the UK to deliver roles on those projects and then building off the back of that, trying to assist with those countries with development of their capabilities. It’s early days but [the strategy] will begin to take shape over the new few months.”

In its 2025 document, the government talked up the benefits of exporting skills in smart and digital construction techniques.

“UK supply chains will secure a substantial share of this rapidly growing market both at home and overseas, where UK expertise in advanced engineering and design leaves our businesses well placed to capitalise on significant export potential.”