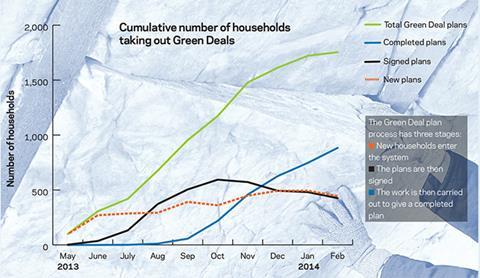 The government has been urged to act to save the “beleaguered” Green Deal after the latest figures showed the number of new households joining the flagship retrofit scheme dwindled to just 33 last month.

The latest official figures from the Department of Energy & Climate Change showed the number of completed Green Deal plans, where the retrofit measures are installed and the household is paying off the costs of the measures through its energy bill, rose to 883 at the end
of February – up from 746 at the end of January.

The figures show a tailing off of the number of households entering into the Green Deal plan process in recent months (see graph above). After a rise of 305 new households joining the scheme in November, just 134 new households joined in December, which then fell to 109 in January, before hitting a trough of just 33 last month.

The numbers fall far short of expectations, with energy minister Greg Barker last year saying he expected 10,000 households to be signed up the Green Deal by the end of 2013.

The figures also showed a continued decline in the number of payments made through the government’s £125m cash-back scheme designed to drive Green Deal take-up, with just 421 payments made in February, down from 464 in January and a peak of 3,298 last June.

Just £2.8m has now been paid out through the £125m incentive scheme.

In response to the figures, the UK Green Building Council (UKGBC) urged the government to “throw a lifeline to the beleaguered scheme”.

UKGBC renewed its call for the government to step in to provide greater incentives to encourage uptake, such as a variable stamp duty that would nudge homeowners into taking action, along with consequential improvement proposals that would require energy efficiency work to be undertaken in building extensions.

John Alker, UKGBC director of policy said: “This is by the far the worst month on record for take-up of the Green Deal, with fewer new plans now than at the very beginning of the scheme.

“The scheme was always going to be something of a slow burner initially, but the number of new plans is reducing to a trickle.

“The government has already had its wake-up call, it is now crunch time.

“It needs to step in to reduce the cost of the finance plans, strengthen and make permanent tax incentives, and make energy efficiency a pre-requisite for anyone getting an extension this summer.”

In all there have now been 163,096 assessments carried out since the scheme was launched.

Meanwhile, the figures showed that the number of measures installed through the Green Deal’s sister scheme the Energy Companies Obligation (ECO) bounced back in January after a slump in December.

In all there were 73,002 retrofit measures installed through ECO in January, up 10% on December, but still below the 82,237 peak in November, which came before the government announced swingeing cuts to the scheme in the Autumn Statement in December.

This comes after work contracted through the brokerage system collapsed to just £1.2m in December following the government’s announcement of cuts to the scheme.