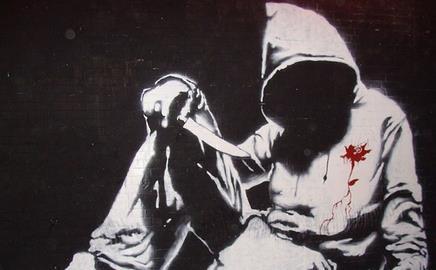 Everybody seems to love Banksy but what do you do when the next generation of celebrity street artists hone their techniques in your neighbourhood?

Celebrated graffiti artist Banksy attracted thousands to his show in London at the weekend. His work has sold to celebrities like Angelina Jolie and people in his home town of Bristol voted to keep one of his works rather than scrub it off.

Elsewhere housing associations and community groups have set aside walls for young residents to paint on under the guidance of local artists. But for other councils and landlords graffiti is a nuisance and a signal of a neighbourhood in decline. What do you think? A council that is tough on tags and a housing association that sets aside space for spraying kick start the debate.

We acknowledge the interest and enthusiasm that currently exists for well-known street artists such as Banksy. However, Southwark Council’s role is not to act as art critics or to be obstructive but to ensure that action is taken when a public or private site is vandalised.

The council is committed to creating a safe and welcoming environment for residents and visitors to the borough. It is widely considered that graffiti increases the fear of crime in communities, as does poor street lighting, fly tipping, abandoned vehicles and other environmental factors. We have to listen to these concerns and not be drawn into subjective debates on what constitutes art and what doesn't.

Southwark Council takes a tough stance on all forms of anti-social behaviour, including graffiti, and we have a good track record of removing it very quickly. We act on complaints received and remove the graffiti within 24 hours to create a cleaner environment for everyone.

Mention the word graffiti to a group of tenants and they automatically think nuisance kids or youths.

It is a problem on many estates and local authorities and housing associations spend thousands of pounds a year removing graffiti.

Elements of clean up are needed, but why spend time and money on repeated clean up campaigns, when with a bit of imagination we can be resourceful?

A recent project involving young people living on estates managed by Riverside Housing in Runcorn highlighted that young people, despite our perceptions, are aware of the graffiti and litter problem in their neighbourhoods. After listening to youngsters we have agreed to try out a graffiti board project within a controlled environment which we hope will be owned by local youngsters.

Some may criticise graffiti boards and there is a suggestion that they don’t always work. I would not entirely disagree with this, but I think it all depends on how engaged young people are. Linking projects to wider youth activity aimed at diverting youngsters from something negative to something positive can prove effective.

Some areas that have been subject to graffiti art can work to bring a creative focus to neighbourhoods, but only if they are maintained in the future. Ownership by residents, landlords or councils seems to be the key to prolonged success.

Locations need careful planning, and again without the sense of community ownership, things can go wrong. On the Runcorn estates the children themselves have identified areas that they think will be suitable. This is founded on local knowledge and a sense that they can take care of the area themselves.

Something worth exploring is how projects can be used to bridge the gap between young people, who are perceived negatively by older residents, when in reality the opposite is true.

I think the C7 graffiti project succeeded. And in Runcorn we are hoping to emulate their success by working together with the police, youth services, schools and parents to provide a creative output for young people and a solution to a continuing problem for tenants.