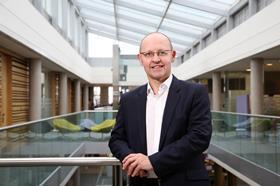 It is the second year in a row the firm has posted a decrease in its profit.

Despite reporting a 36% hike in turnover – to £768m – for the year to the end of March 2018 the firm said margins had been hit by what it called “the knock-on effects of a major contractor collapse”, thought to be Carillion, and the collapse into administration of an unnamed joint venture partner.

Despite the profit dip the firm’s executive chairman Michael Graham (pictured) said it was “at a level that the board is happy with following a year of extraordinary investment in the business” and what he called “issues in the wider industry”.

Recent projects completed include a £113m student accommodation scheme for York University, while the group has been appointed to a number of frameworks including the Department for Work & Pensions and the £750m Clyde Commercial Framework.

The group employs around 2,000 staff operating from 17 offices across the UK and Ireland. It opened offices in Leeds and Liverpool during the year.