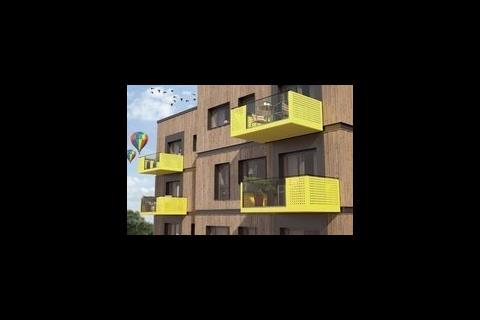 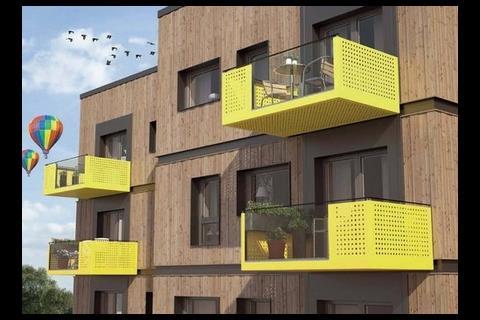 With growing pressure to build quick yet green buildings, the UK should look to Sweden for inspiration

There is pressure to build quickly to solve the UK housing shortage but there’s equal pressure to build green to combat global warming. British developers, designers, contractors and councils should look to Sweden for the answer.

“The cost of energy, plus our cold climate made us very aware of conserving it and finding alternative ways of producing it.”

Some 30 years on and this trend is yet to abate. Sweden is doing very well in the environmental stakes because of it.

Since the early 1980s cities including Malmo, Gothenburg and Stockholm have been extending the use of district heating systems that use wood pellets, household waste and biogas, as well as combined heat and power (CHP) plant to achieve up to 80% coverage of urban homes. Today, only 8% of homes depend on oil, they are far more likely to use wood pellet burners.

EU targets, such as achieving 20% energy consumption from renewables by 2020, are redundant in Sweden; it had surpassed that marker by 1990.

Instead the country sets its own goals. Sweden is set to become an oil-free economy by 2020; its building standards are amongst the toughest in the world; and, properties being bought and sold have to produce a kWh/sqm figure to demonstrate energy efficiency.

The result is a country that has the jump on the UK when it comes to sustainable construction. Over the last decade developments such as Hammarby Sjöstad in Stockholm and Malmo’s Western Harbour have become renowned as successful sustainable urban developments on a large scale.

“We did a study of high density housing in Europe a few years ago and watched Hammarby Sjöstad grow,” says Andy von Bradsky, chairman of PRP Architects.

“It represents all that I see as being beneficial to UK urban design. Good quality homes, sustainable design, great public realm, good infrastructure and a system of procurement that encourages interaction and cooperation between the public and private sectors.

“Since its completion, we’ve taken clients and colleagues to visit Hammarby Sjöstad. It is a diverse, busy neighbourhood that is full of life and excitement, offering not only the environmental benefits of sustainable design but also the social and economic ones, too.”

Alexandra Hagen, director of Swedish architect White Arkitekter ab, has been heavily involved in the Hammarby Sjöstad development and her practice is renowned in Scandinavia for its sustainable architecture.

“The scheme is a very well designed and coordinated master plan for an entire area of the city,” she says. “This is where it differs from the isolated single building approach: politicians, the City Architect, developers and designers came together to make it happen.”

Similarly, in Malmo, the Western Harbour has been regenerated on the back of a partnership between 13 developers and the City.

“It was funded mainly by public money but developers saw the benefits as they worked on the scheme; now, the second phase is being built to similarly high standards purely on private funds.

“It made commercial sense to developers and we are now seeing new proposals for the city edge that all feature many sustainable measures and innovations including passive housing, the type that needs little or no heating.”

Advances in housing design are already afoot in the UK, the most prominent demonstration being at the BRE’s Innovation Park. However, more importantly, constructors and developers are looking to bring new products to the commercial market, too.

One company showing at the BRE Park was ecoTECH. Its Organics home is a closed panel timber frame solution based on the skill set found through the experience in Sweden over the past 30-40 years.

Skanska has recently imported and adapted ModernaHus from it’s Swedish operation. It is a medium rise housing solution, now fully certified with BRE for the UK market.

“It is a panelised residential concept for four to 11 storeys apartments,” says Nick Forwood, head of communities marketing for Skanska UK.

“Skanska has invested to innovate in process, and, while using tried and tested construction methods, to offer improved quality in finish, faster onsite programmes, and become more cost effective compared to traditional solutions.”

ModernaHus has been designed to accommodate and be connected to PV solar panels, solar water panels, biomass CHP, ground source heat pumps and the alike.

It also uses a whole house ventilation unit with an integral heat recovery extract to recover up to 70% of the warm air produced from the kitchens and bathrooms.

Skanska is currently in the process of preparing for its first development using ModernaHus. The scheme will be submitted for planning later this year.

However, these home designs are not the whole answer.

Von Bradsky says: “Sweden deals with its carbon footprint on two levels. The buildings are super insulated and low energy and the neighbourhoods have local energy generators and waste treatment plants. It is a vast improvement of the British model.

“The role of the public authority is also very enlightening, from procurement to neighbour hood energy and waste treatment. Procurement is the most challenging element of the UK market but if there was more collaboration and inward investment for infrastructure developers would be encouraged to work with local authorities and build better communities.”

Graham agrees: “Currently Britain has a business model that encourages developers to build boxes for people to live in; they have no incentive to build energy efficient homes. In Sweden, where the developers have become involved with local decentralized energy provision and management, they have a bigger incentive to build better homes and find new ways of providing energy and heat, such as bio-gas, CHP and waste incineration.”

The British government’s answer to promoting sustainable growth and generating a new renewables market is currently rather less sophisticated - offer cash incentives to people who install solar panels and then sit back and hope, while the scheme is oversubscribed and people get disillusioned.

In contrast, Sweden has the Building and Housing Dialogue, a voluntary code for developing to strict sustainable targets to which four municipalities and 35 companies have signed to since 2003.

The Swedish Energy Authority (SEA) also sets up partnering deals with buyers groups to promote design innovation. Eco-fridges, cars powered by ethanol and more efficient bath taps have all come to the Swedish market via design competitions hosted by the SEA, in which the winner is guaranteed large scale purchases of products by the buyers group.

Paus sees the benefits: “These initiatives have produced results that include reusing heat from waste water; turning effluent into biogas for car and heating; we even have a large system in Stockholm that uses seawater to cool buildings.”

The UK is learning. The Code for Sustainable Homes aims to upgrade energy efficiency; the HIPs have energy ratings in them for house buyers; the GLA has imposed legislation that promotes renewables in London. However, the lessons we can take from Sweden do not only involve a new technology or redesigned building type. Integrated working at all levels is the key.

From design teams coming together at the very start of a project; to developers working with local councils; the energy authority partnering with buyers groups; and government encouraging alternative energy production, rather than simply giving them lip service, everything is achieved through integrated working.

“It is the most important aspect of sustainable development,” says Paus.

“Integration and early involvement of all parties at all levels, then you can really influence things and make a real difference to the outcome, whether it is a single house or a city-wide plan.”