Make Architects’ controversial plans for a huge office complex on the site of ITV’s former London headquarters have been given the green light.

Lambeth council’s planning committee voted six to one in favour of the proposals at a tense meeting yesterday evening after more than three hours of debate.

The scheme, believed to have a price tag of between £300m and £400m, is set to see the 24-storey tower on the South Bank that was previously occupied by ITV’s London Studios flattened and replaced by a new, larger complex.

Known as 72 Upper Ground, the development will consist of a 26-storey tower and a 13-storey block connected by a six-storey podium with more than double the floorspace of the existing building.

The divisive proposals have been the subject of hundreds of objections from locals due to the scheme’s scale and concerns about the overshadowing of nearby properties. 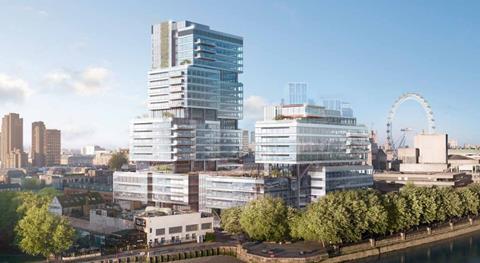 It has also stirred controversy due to its setting next to listed brutalist landmarks including Denys Lasdun’s grade II*-listed National Theatre and the grade II-listed IBM Building.

While the scheme had been recommended for approval, the planning officer’s report conceded that it had been “controversial and extremely unpopular” with locals.

But, despite the report finding that there would be a major adverse effect on sunlight for 25 windows of an adjacent residential block at 95-97 Upper Ground, it concluded that the overshadowing impact was “acceptable”.

With moderate and minor overshadowing of a further 12 windows, there would be a potential total of 86 occupants of the building whose daylight levels would be affected.

However one resident told last night’s meeting that the light in the living room where she spends most of her time would be reduced by 63.5%.

“What is acceptable about condemning these lives to be lived having only a fraction of our currently available light?” she said, adding: “All the advantages that you’ve argued for in this application can still be applied to different designs that are not at the expense of so many people’s health, wellbeing and quality of life.”

Tom Keller, who said he had lived in social housing in the Waterloo area for 40 years, said: “We’re not NIMBYs, we welcome development of the site.”

But he added the scheme would cause “permanent serious harms” to social housing tenants and “dominate” the nearby Queen’s Walk and Bernie Spain Gardens, both of which would also be partly overshadowed.

Stephen Black, director of the site’s developer CO-RE, said the “vibrant and dynamic” complex would help to drive Lambeth’s post-pandemic economic recovery and “complete” the South Bank. But objectors shouted at him, telling him to stop talking when he overran his allocated two-minute slot at the meeting.

Last night CO-RE said it was delighted that the scheme had been approved.

The same heckles were directed towards Make partner Frank Filskow when he also overran his speaking slot, prompting the committee chair Joanne Simpson to intervene and clarify that it was her job to decide whether people giving representations should stop talking.

Filskow said the scheme would give workers “views, fresh air, opening windows, balconies and garden terraces on every floor”.

He added that the design, which is characterised by an assemblage of large cuboid shapes, was a “direct response to the unique character of the South Bank with its iconic modernist cultural buildings”.

But councillor Jennie Mosley said the plans did not fit architecturally with the surrounding buildings and would represent a “major eyesore”, while councillor Kevin Craig said the scheme was an “overbearing, bulky building, excessive and overtly dominant in its context” and that its scale was “simply too much”.

Defending the recommendation to approve, the planning officer said that the proposals would make a “major contribution” to reversing the loss of 150,000ft2 of commercial space in Lambeth since 2010, and that its massing and height “responds well to the site’s context”.

Simpson said in her closing remarks that, while she understood the concerns about the design, it reflected the brutalist style of the South Bank’s existing buildings “without being pastiche”.

She added that because of many neighbouring properties being dual-aspect, and the city centre location of the scheme, she did not think on balance that its impact on daylight of the surrounding buildings was “unacceptable to a degree that would warrant refusal of the scheme overall”.

Vauxhall MP Florence Eshalomi, in whose constituency the site is located, published an objection to the scheme last week and called for the application to be reconsidered.

Other objectors included Coin Street Community Builders and the Waterloo Community Development Group, which previously led the successful campaign against the Garden Bridge across the Thames. It described the proposals as “grotesquery on steroids, a swollen deformity for the South Bank”.

The plot was bought by developers Mitsubishi Estate and CO-RE for close to £150m in November 2019 following ITV’s closure of its studios the year before.