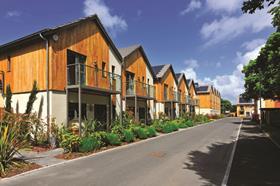 The government faces significant challenges in living up to its promise of being the “greenest government ever” and is showing “very worrying” signs with some aspects of its sustainable building policies, experts have warned.

The UK Green Building Council has published a progress-to-date report card on key aspects of the government’s green policy, which has given ministers  an overall rating of “D+” or “could try harder”.

In particular, it said ministers were sending “disconcerting” mixed messages to business  and that chancellor George Osborne had showed “a complete lack of understanding” of green growth opportunities, in contrast  with signals coming out of the Department of Energy and Climate Change.

The Green Building Council gave the government its worst marks for zero-carbon new homes, which it said was a “very worrying” area.

It said former housing minister Grant Shapps – promoted to Conservative Party chair by David Cameron in this month’s reshuffle – had pledged to maintain the previous government’s ambitions in the area and define what constituted “zero carbon” by the end of summer 2010.

“He left the post two years later with the ambition of the policy significantly scaled back and the definition still up in the air,” the council said, adding the government had also put the Code for Sustainable Homes up for review, raising questions about environmental standards.

It said the government’s progress with zero-carbon commercial buildings was “also worrying”, with similar uncertainties about the future remaining.

More positively, the Green Building Council praised the government for its commitment to mandatory greenhouse-gas reporting, and for its procurement practices in  cutting carbon by 10% in a year for its Whitehall estate and targeting a 25% cut by 2015.

It added that the government home retro-fit policies were genuinely innovative, but faced significant practical concerns with their implementation.