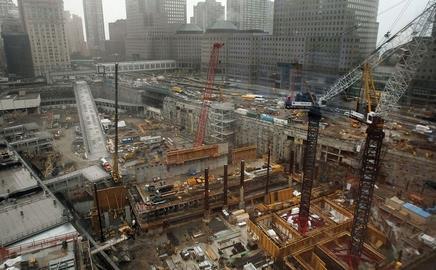 A Grimshaw-designed transport centre at the new World Trade Centre complex in Manhattan, New York, is to be scaled back amid budget concerns and lack of interest from contractors.

The $1.19bn (£508m) Fulton Street Transit Centre, to be built at the foot of the World Trade Centre, will feature a glass building designed by Grimshaw’s New York office and James Carpenter, an American architect.

But the New York Metropolitan Transportation Authority (MTA) says it will be “streamlining the work” as only one contractor had submitted a proposal to build the original designs. It has pledged $295m (£149m) to build Grimshaw’s building, $75m less than the original budget.

The showpiece, a glass funnel to bring natural light into the areas below street level, is likely to be the first element to be scaled back or even removed.

The MTA set the original budget for the transit hub at $903m (£456m) when it was announced in 2004, but much of this has been used on an underground project to improve the station itself, which is designed by Arup.

It then put the Grimshaw building out to tender last year with a proposed budget of $370m (£187m). Two bidders expressed an interest but only one submitted a bid which, at $875m (£442m), was more than double what the MTA was prepared to pay. However, complaints from local residents and community groups have forced the MTA to free up funding for the project.

The MTA said: “MTA Capital Construction is reorganising the remaining work into multiple construction contracts with the goal of streamlining the work and fostering competition.”

For more on Grimshaw to www.building.co.uk/archive