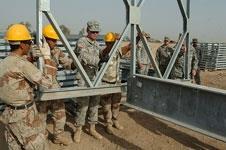 Peter Gammie, the multidisciplinary consultant’s chief executive, introduced its Strategy 2018 initiative earlier this autumn, which charged senior managers with spelling out a growth plan to 2018.

Halcrow decided to leave Iraq in 2004, a year after the US-led invasion of the country, because of security fears.

David Yaw, the group’s regional managing director for its Middle East operations, has said he now expects the firm to re-open an office in the Iraqi capital in the near future.

Halcrow would be the first consultant to return to Iraq after the outbreak of the Second Gulf War. Asked how far it was away from establishing a permanent base in Iraq, Yaw said: “It’ll be nearer one year than three. Iraq is the next big thing because the security situation is improving. But the issue is safety. I’ve got to feel safe enough to go there myself.”

Halcrow is working on a scheme in the Kurdish north of the country at Sulaimaniyah and recently received enquiry documents about the planned Baghdad metro. The firm has linked up with Finnish consultant Pöyry to run the rule over the job.

Yaw, who is based in Dubai, added that Halcrow’s decision was dependent on the attitude to Iraq of incoming US president Barack Obama.

He said: “A lot will depend on Obama and the US response to Iraq. The market is massive out there because everything has to be rebuilt.”

The firm already has a sizable presence in the Middle East, and works in political hot spots such as Pakistan and Iran.

Yaw said Iran was also a big growth area and wants to make sure the company, which is advising on a major road from the capital Tehran to the Caspian Sea, is at the forefront of a major push on infrastructure projects.

The news came as it emerged the British Army plans to open a £10m museum in Basra.

The job will involve the reconstruction of a palace formerly owned by Saddam Hussein to hold Iraqi relics and antiquities.

Last month, Mott MacDonald won a slice of a £10bn scheme to help in the rebuilding work planned for the area around Basra in the south of Iraq.