Half of Londoners worried about tall towers

Historic England has called for a shake-up of planning consultations in London after a YouGov poll revealed that half of Londoners think the new towers proposed for the capital will have a negative impact on the skyline.

According to the survey, 48% of Londoners said the 430 tall buildings planned for the capital will not be good for the capital’s skyline compared to 34% who thought the new schemes will have a positive impact.

The poll, which was undertaken last month, found that more than half of people questioned did not know how to make their voices heard, although 60% felt that residents across the capital should be allowed to have a say on a tall building proposal if it is located close to a historically important site.

Historic England said the survey showed that wider public involvement in planning consultations was needed in the next London Plan.

Its chief executive Duncan Wilson said: “Londoners know how special their city is and they know that the future of our capital hangs in the balance. Tall buildings can make an excellent contribution to city life if they are well-placed and well-designed. 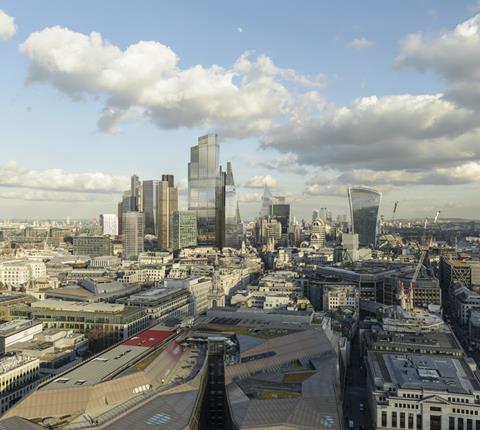 How London’s proposed tower pipeline will look, according to an NLA report out earlier this year

Historic England has said developers and architects need to draw up more plans for lower buildings if London is not to be overwhelmed by “hopelessly generic” tall buildings.

Earlie this year, Wilson criticised New London Architecture chairman Peter Murray’s insistence that it was “inevitable” more tall buildings will have to go up in the capital if it is to meet an expected population boom.

The heritage body was one of a number of groups to oppose Renzo Piano’s 72-storey Paddington Pole – later withdrawn by the developer Irvine Sellar – and Wilson said: “Peter Murray says shorter and fatter buildings aren’t the answer to London’s need for growth. Denser, well-designed and lower developments are exactly the way we can continue the essential architectural traditions of London, while delivering greater capacity for housing and workplaces.”

London’s population is expected to hit 11 million by 2039 – an increase of 2.5 million on the current number – and Murray had suggested that “accommodating these sorts of numbers will inevitably demand more tall buildings”.

So less than half of Londoners think that 430 towers will have a negative impact on the city’s skyline!

In my experience, Londoners are less sceptical about tall buildings than some commentators might think. Some tall buildings are really popular – the Shard, the Gherkin, the Leadenhall Building. That being said, I would have expected such a bald question to have received a more negative reply;  this is a big change in the skyline and sadly not all the buildings will be of the highest quality.

New London Architecture has been campaigning since we first publicised our round-up of proposed tall building in 2014 for broader consultation on the changing skyline. We have asked the Mayor to commission a 3D virtual model of London – a sort of XBox for planning – that would allow developers to put their computer model in place and show accurately the impact it would have on the wider city as well as the local streetscape. The virtual model would even be able to assess the impact of wind and on daylight. The City of London already has a model like this and it is proving very useful in the detailed future planning of the eastern cluster of towers.

It is essential that, as the Mayor’s Design Advisory Group suggested in its Agenda of Good Growth published last month, that we improve the tools which planners and the general public can assess the visual impact of tall buildings. This would not necessarily stop tall buildings being built but help to ensure they are of the right quality and in the right place.