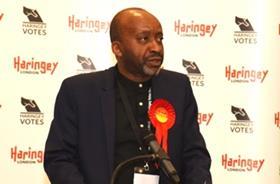 Haringey council last night scrapped its controversial £2bn housing joint venture with Lendlease fuelling speculation that the builder will make good on its promise to begin legal action against the authority.

In a tweet sent out by the local authority, the council confirmed its cabinet “decided not to proceed” with the initiative known as the Haringey Development Vehicle (HDV) on which Lendlease was appointed preferred bidder back in 2016.

It also said last night’s meeting had made a decision to “establishing a wholly owned company to provide more affordable homes”.

The news seems certain to see Lendlease call in the lawyers after a letter sent to new council leader Joseph Ejiofor (pictured) by Lendlease Europe’s chief executive Dan Labbad last week warned the company would be ready to seek redress for the “very significant investment over the last two and a half years” should the administration seek to reverse the decision of its predecessor.

In the letter, Labbad, who addressed last night’s meeting, told Ejiofor, a senior member of the left-wing campaign group Momentum, that “Lendlease is entitled to be treated fairly and not to be discriminated against and the council is obliged to act rationally”.

He added: “You will presumably have taken legal advice about the full range of remedies that would be open to Lendlease if we were prevented from proceeding. The council will be aware that it must follow due process in fully and properly considering its obligations arising from this procurement. It must not take any decision which would be irrational, in particular in the context of the borough’s urgent need for housing.”

The council said it has so far spent around £2.5m on legal and commercial advice relating to the HDV.

The HDV would have seen the contractor build more than 6,000 homes in the north London borough, while land owned by the local authority was to be transferred into the venture.

It was this aspect of the HDV which proved most controversial, and local Labour candidates in May’s council elections campaigned on a promise to bin it.

While Lendlease said it was still willing to work with the council, a report by the council’s planning office recommended the authority’s cabinet terminate the HDV.

The report said the new administration did not agree with a series of assets wholly-owned by the council being transferred into the partnership, while it also objected to the level of risk the project faced.

It was these factors, rather than qualms with “the principle of partnerships with the private sector”, that led to the recommendation to shut down the HDV.

Critics of the scheme have included the Labour leader Jeremy Corbyn and his counterpart at the Lib Dems, Vince Cable.

But sources have said the council lacks the know-how to get an alternative to the HDV up and running.

A number of high-profile staff have left in the past 18 months, including former chief executive Nick Walkley at the end of 2016 to take up the chief executive role at Homes England, and Claire Kober, the council leader who oversaw the deal with Lendlease but quit earlier this year after 10 years in the post.

One source told Building last month new homes in the borough would be “years” away if the HDV was scrapped: “Lots of good people have left. Now Momentum has been inserted into the mix, you’re looking at years and years of inactivity.”

“At the end of the day it’s the residents of Haringey who will suffer most from this decision, given that 10,000 families remain in desperate need of a home.

“The flexible framework that the HDV offers would deliver enormous benefits in terms of homes, jobs and wider community facilities quickly to address this need.

“We are extremely disappointed the council has voted not to proceed with the HDV without even offering us the opportunity to discuss face to face, undoing four years of planning in just a matter of weeks.”