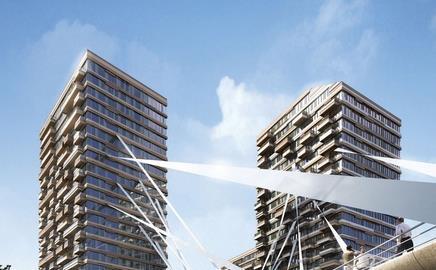 A signature bridge design by Thomas Heatherwick has quietly been dropped from a Docklands development.

The scheme is the fourth bridge design to have been axed from the Leamouth area in the past six years.

Heatherwick replaced Wilkinson Eyre in 2006 as the designer of the bridge, which will link Ballymore Properties’ Leamouth Peninsula scheme with Canning Town.

It has now emerged that Heatherwick’s design was dropped shortly afterwards in favour of a more standard design by Leamouth masterplanner Skidmore, Owings and Merrill.

A spokesperson for Heatherwick said: “The proposal was unusual. The bridge was to have been supported by the towers on the peninsula, but because of the complexity of the design the decision was made not to go ahead with it.”

In 2002, Peabody Trust scrapped a proposed design by Cartwright Pickard for an “inhabited bridge” over the river Lea. A £3.5m pivoting footbridge designed by Whitbybird had its funding withdrawn by the Thames Gateway Delivery Unit in 2005.

Wilkinson Eyre, which won the Stirling prize for its Gateshead Millennium Bridge, was appointed by Ballymore in 2004 to design a far larger bridge at the tip of the peninsula.

After a withering review from Cabe, Wilkinson Eyre was replaced by Heatherwick, but developer Ballymore Properties had another change of mind, and SOM will now design the bridge.

However, Paul Brickall, chief executive of Leamouth Regeneration, says a second bridge could be built as part of the second phase of the Ballymore scheme using the Whitbybird design.

He said: “Whenever phase two will be designed, the expectation is that it will be Whitbybird’s design that will be used. Everyone here agrees we need at least one bridge, it’s just the mechanics of getting it delivered.”

A SOM spokesperson said “SOM’s design for the revised bridge is currently going through planning and is intended to be a landmark for the Leamouth Peninsula site.”

The first phase of the peninsula is at groundworks stage and the second phase will go for planning later this year.

More on Thomas Heatherwick at www.building.co.uk/archive