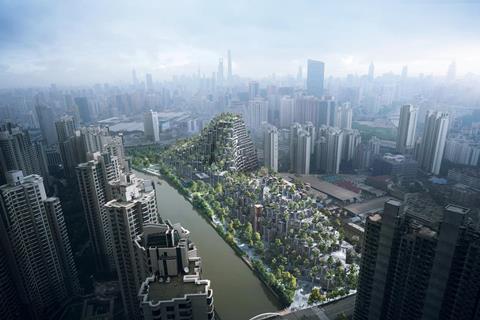 Heatherwick Studio has released an image of what its plans for a 6ha park in Shanghai will look like when it completes in 2018.

The firm landed the work after its success with the UK Pavilion at the Shanghai Expo five years ago.

The mixed-use scheme is next to the Chinese city’s main art district, M50, and next door to a public park. It is split over two plots separated by a narrow strip of government land and incorporates several historic buildings.

Heatherwick said the design takes the form of two tree-covered mountains, populated by approximately 1,000 structural columns. It includes 400 terraces and runs across 300,000m2.