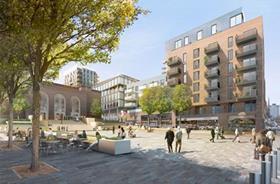 Developer Helical Bar has made a raft of senior appointments, including a new chairman, finance director and two non-executive directors.

Richard Gillingwater, the dean of the Cass Business School, and Richard Grant, finance director of Cadogan Estates, have been appointed non-executive directors.

After 19 years on the firm’s board – the last seven as chairman – Giles Weaver will not stand for re-election at the Helical Bar’s AGM on 24 July.

Fellow long-serving directors Anthony Beevor and Wilf Weeks are also stepping down at the same time.

Helical Bar is one of the UK’s largest clients and is behind the proposed King Street development in Hammersmith, London (pictured).