West London firm Henry Construction has begun work on a deal to turn the former headquarters of Croydon council into more than 500 homes.

The 1960s office block called Taberner House was torn down in 2014 but the site remained empty while developer Hub was appointed.

Hub replaced the council’s own development arm, which had been due to mastermind the work, in summer 2016 and asked Stirling Prize-winning architect AHMM to come up with new plans for the site. The previous proposal was drawn up by Make and would have featured 420 homes built across five blocks.

AHMM’s scheme includes a 35-storey block with three other blocks of 21, 19 and 13 storeys. The scheme will also include 1,200 sq m of retail and commercial space.

The 35-storey tower features 251 build-to-rent homes with the Taberner House scheme having a development value of £200m.

Landscape architect Grant Associates is carrying out work on the nearby Queen’s Gardens.

Hub is being backed by investor Bridges Fund Management with the pair having sold the 35-storey tower to insurance giant Legal & General for £100m.

Legal & General, which earlier this month set up an affordable homes arm, now has a pipeline of close to 2,000 build-to-rent homes and wants 6,000 either in planning, being built or finished by the end of next year.

Henry is also one of a number of firms that is on a framework for a development company set up by Croydon council to make sure homes are better designed.

The roster of architects on its framework panel includes a number of award-winning practices including Mae, Stitch Architects, Coffey Architects and HTA Design – the practice of current RIBA president Ben Derbyshire. 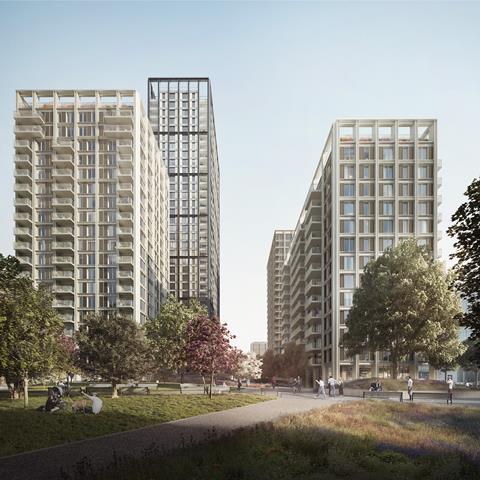 Work on Taberner House will finish in 2021