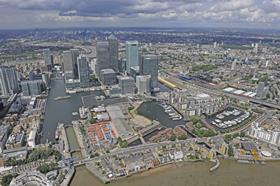 Signature architect Herzog & de Meuron is set to design one of the tallest residential towers in London after being appointed to design the first phase of the Wood Wharf development alongside British firms Allies & Morrison and Stanton Williams.

Developer Canary Wharf group today announced that the architects would be working alongside masterplanner Terry Farrell on the Thames-side scheme, which is adjacent to Canary Wharf.

Farrell was taken on last September after Canary Wharf Group decided to revise the old masterplan for the 20 acre site by Rogers Stirk Harbour & Partners for previous owner British Waterways and Ballymore.

This tower will be “one of the capital’s tallest” residential buildings, the developer said and “will set a new benchmark” for high rise housing.

Senior Partner at Herzog & de Meuron, Ascan Mergenthaler, said: “The new Wood Wharf tower will mediate between the city and the individual, public and private and will inject a new component of daily residential life into the evolving mixed-use Canary Wharf district.

“It will be both a symbol and the heart of the new Wood Wharf urban quarter, an extension of a dynamic global community and the start of a new vibrant neighbourhood.”

Robert Maguire, project director for Wood Wharf at Canary Wharf Group said: “This is one of London’s most exciting waterfront developments. It will be an evolution of Canary Wharf, helping to meet the needs of London’s growing business sectors, in particular technology and new media firms, and provide another large step forward for the regeneration of East London.”

The two office buildings by Allies & Morrison and the residential towers designed by Herzog & De Meuron and Stanton Williams are intended to be built by Canary Wharf Group in the first phase of development, with construction commencing in 2014.