Tory MPs have urged the Government to abandon its current plans for High Speed 2.

The Conservative Transport Group said the route to Birmingham through the Chilterns was fundamentally flawed.

In response to the government HS2 consultation, the group said the rail line should be routed away from open countryside and instead run alongside the M40 and the existing Chiltern railway line.

It said HS2 should interchange with Heathrow rather than Old Oak Common in London, which is 12km further East.

The Government should also carefully consider the business case before giving the project the go-ahead, according to the group of Tory MPs.

It said: “Our fear is that, like the initial forecasts for the Channel Tunnel Rail Link, HS2’s demand modelling is over-optimistic, with the inevitable result that there is a call on the public purse to ultimately subsidise operations.”

The group said pressure from local constituents was a huge political issue for Conservatives. It said that Tory ministers and MPs on the route of HS2 were ’under siege’ from new opposition movements, whose members had traditionally made large contributions to local Conservative Associations. 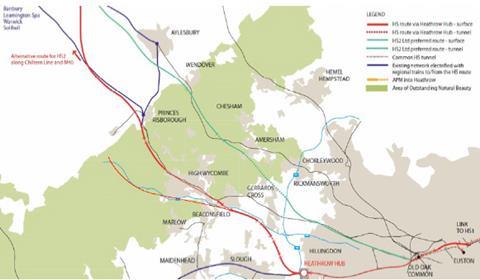