Hotel made out of shipping containers starts on site

Holiday Inn will have 220 rooms

Architect Chapman Taylor is behind plans for a new hotel made out of shipping containers at a Manchester retail and leisure park.

The modules are individually stacked on top of the podium structure, meaning all 220 guest rooms are installed within a period of between two and four weeks.

Each module comprises two fully furnished ensuite rooms, separated by a section of circulation corridor, complete with all building services. 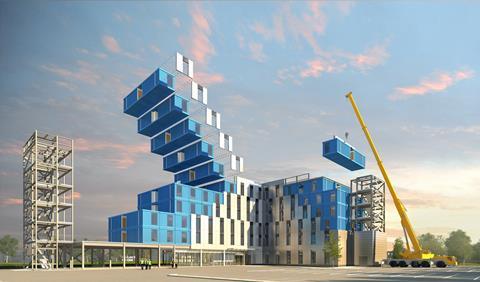 The scheme is made out of purpose-built steel shipping containers

The Holiday Inn Express is due to open by the middle of next year. It is being built at Trafford City, which is sandwiched between the Manchester Ship Canal and the M60 motorway. Main contractor on the scheme is Bowmer & Kirkland.

Chapman Taylor was recently given planning for the £1 billion second phase of work at Media City in nearby Salford.