Machines to arrive in the UK by end of next year

HS2 has awarded the contract for the first two giant tunnelling machines for London’s HS2 tunnels.

The deal, which has been signed with HS2’s main works civils contractor, the Skanska Costain Strabag joint venture (SCS JV).

The tunnel boring machines (TBMs) are being built by German manufacturer Herrenknecht, which is also building the TBMs for the Chiltern tunnels, and will be delivered to the site in the UK by the end of 2021. 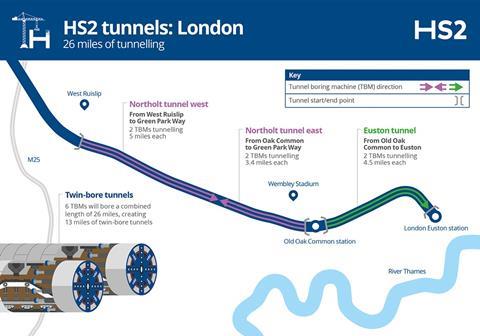 They are being designed and manufactured specifically for the London clay and chalk ground conditions they will bore through.

The London tunnels for HS2 are twin bored and will be 13 miles each way.

The combined total of 26 miles means the London tunnel’s will be the same length as Crossrail.

The London tunnels will begin just outside of Euston station and will be below ground until they emerge in west London at Old Oak Common station. The route will continue underground from Old Oak Common to the outskirts of West London.

These first two London TBMs will be launched from a portal at West Ruislip and will travel five miles east, creating the western section of the Northolt Tunnel.

Once they arrive at Green Park Way in Greenford the machines will be extracted from the ground and the site will then be used as a vent shaft.

Once assembled, the TBMs will begin the tunnel drive from mid-2022, until completion at the beginning of 2024.