The first phase of Europe’s largest infrastructure project is running five years behind schedule, the government has revealed.

Transport secretary Grant Shapps also said the true cost of HS2 is set to be between £81bn and £88bn.

In a written statement published this afternoon, Shapps published the headline findings by HS2 chairman Allan Cook, who had been tasked with scrutinising the budget and programme of the rail scheme.

Cook said under current plans, phase one will be finished between 2028-2031 while the entire project will be completed between 2035-2040.

But he also said phase 2a could be delivered under the same timetable as phase 1, and said he thought the widely-trashed cost-benefit analyses of HS2 had underplayed its value to the taxpayer.

Cook’s full report, minus commerically sensitive information, is due to published later this week.

Shapps has said HS2 Ltd will continue to go ahead while its former chairman, Doug Oakervee, leads a review on the benefits of and potential changes to the project.

Shapps said once Oakervee has reported his findings, he will hold discussions with prime minister Boris Johnson and chancellor Sajid Javid, and that “its recommendations will inform our decisions on our next steps”.

A spokesperson for HS2 said Cook’s report “makes clear that HS2 remains a compelling strategic answer for Britain’s future transport needs, relieving overcrowding and congestion on our roads and railways, and reducing the carbon footprint of the UK.”

Delays to HS2 come on the back of procurement challenges which have delayed the signing of key construction contracts.

Three contracts with a combined value of more than £2bn are being re-tendered as HS2 did not want to take any bids for them forward. These included a package to build Curzon Street station in Birmingham and deliver the track for the phase one of the line.

HS2 has also been held up by a legal challenge from Bechtel, which has blocked it from signing a contract for Old Oak Common station for more than six months.

Phase 1 delays will cast further doubt over the timings for phase 2 of the project, which had been due to complete by 2033. 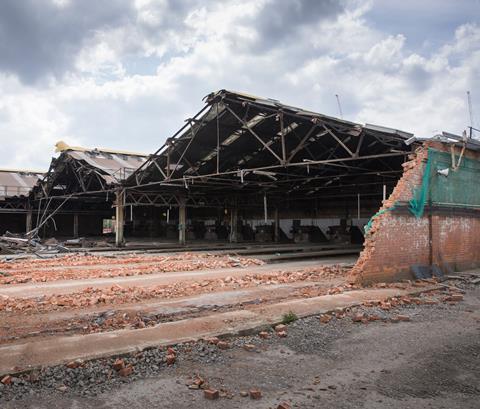 Sheds owned by Great Western Railway at Old Oak Common were mid-way through demolition, as of June

As costs began in 2009 and are not due to end until around 2040, the spread costs for HS2 under this budget would be around 0.4% of national spending per year.

The government has vowed to make a decision on whether to scrap HS2 by the end of the year, but even if it does, its price tag could be reduced through changes to the scope.

Mark Thurston, HS2 chief executive, has previously mooted the use of ballast, instead of slab track – although this will decrease the maximum speed possible on the line for its lifetime.

Cuts to the maximum speed, by 50km/h, have also been proposed to reduce costs, as has a decrease in the frequency of trains.

And in May the House of Lords Economic Affairs Committee called for the line to terminate at Old Oak Common in west London, at least initially, instead of at Euston – although to date Euston is the only station for which HS2 has signed a construction contract.